Energy is certainly the ‘thing’ to watch in the years, well decades, ahead. Amid heavy political pressures from the West, the world is heading for an unprecedented energy transition in which fossil fuels are going to be replaced by renewable energy sources. This is certainly great news for the environment (but whether the energy transition can ease, let alone stop, climate change – which is cited as the goal of this transition – seems iffy though).

As we have emphasized on various occasions before, this energy transition is not a transition without risks. Energy is the basis for, essentially, all products and services that are made in the world today as well as for transportation. And so, in case the supply of energy is distorted for whatever reason, it can potentially trigger massive inflationary pressures as well as economic and social damage.

Moreover history shows that excessive government intervention can heavily disrupt markets and industries. In fact, in 2021, we are witnessing to what extent severe state intervention can trigger an energy crisis. Although it is a unique situation, the decision of governments to impose lockdowns in 2020 in an effort to combat the COVID-19 virus – thereby seriously disrupting trade, consumption, and production, including energy production – led to a sudden and massive jump in energy demand when the recovery kicked in. Exploding demand yet disrupted logistics and depleted supplies, caused energy prices to surge heavily, particularly in parts of Europe and China (with, in some nations, electricity prices surging by triple-digit figures).

However, the energy transition is also an important factor behind this energy crisis. As many countries are moving away from coal to natural gas and renewable energy, there occur imbalances that quickly come to the surface in difficult times. Moreover, renewable energy sources (such as wind and solar) are still less reliable than fossil fuels (particularly during winters), and generally do not create energy at scale (yet).

Therefore, the energy transition toward renewable sources is not without risks. The positive news is though that a growing number of companies and countries seem to embrace this transformation, implying more and more money becomes available to be invested in renewable energy (although the danger is that enormous quantities of money are used unproductively in case the transition fails at some point).

In terms of Indonesia’s energy supply, we often read about the dichotomy between fossil fuels and renewable energy sources. But is there perhaps a middle way? Well, yes, and it comes in the form of nuclear energy. The interesting thing about nuclear energy is that the energy is renewable, but the fuel used is not renewable (uranium being the most widely used fuel by nuclear power plants for nuclear fission). Still, it is generally regarded a clean energy as nuclear power does not create air pollution or release greenhouse gases. So, is nuclear power an option for Indonesia?

Read the full article in the November 2021 report. This report can be ordered by sending an email to info@indonesia-investments.com or a message to +62.882.9875.1125 (including WhatsApp). 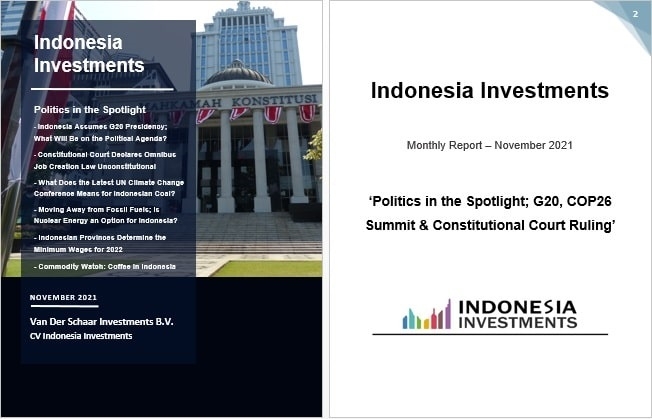