Indonesian Transportation Minister Ignasius Jonan said that the Cilamaya port project in Karawang (West Java) may be tendered this year to the private sector. The central government is currently engaged in the preparation of the terms of reference (TOR) for the project. Through the construction of the Cilamaya port, which will occupy 2,000 hectares of land some 65 kilometers east of Jakarta, the government aims to reduce the country’s logistics costs and ease traffic at the Tanjung Priok port, the largest Indonesian seaport, in Jakarta.

The development of the Cilamaya Port is one of the five flagship infrastructure projects under the Metropolitan Priority Area (MPA) for Investment and Industry in the Greater Jakarta Area, a framework established by the governments of Indonesia and Japan. Objectives of the MPA is to enhance attractiveness of the Greater Jakarta area for direct investment and industrial development primarily by accelerating infrastructure development. When realized, the new port will facilitate the movement of goods from and to the industrial estates in Karawang (east of Jakarta), a large industrial area that houses various estates for the automotive, electronics, machinery and information technology manufacturing sectors. Construction of the Cilamaya seaport is estimated to take five to ten years and to cost about IDR 130 trillion (USD $10.3 billion). However, the minister said that there is yet to come an investor to express his interest in the project. 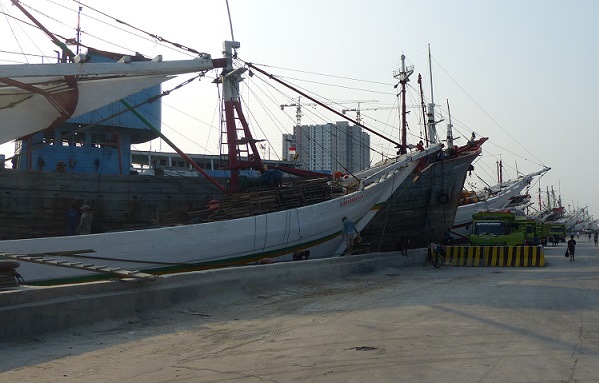 Last year, the second Susilo Bambang Yudhoyono administration (2009-2014) decided to postpone the Cilamaya port construction due to a conflict with state-owned energy company Pertamina. Go-ahead for the Cilamaya port implied that Pertamina needed to relocate one of its offshore plants. However, both sides disagreed over the amount of compensation that should be disbursed to Pertamina to offset costs for the removal of its pipelines at the construction site. On Thursday (12/02), Jonan said that the seaport can be relocated three kilometers away from the initially proposed location in order to avoid disruption at Pertamina’s oil and gas production block. Another problem that occurred was that the Cilamaya seaport is to be constructed in a farming area and therefore could hamper the central government’s food self-sufficiency program.

Minister Jonan said that the Cilamaya seaport project will not be financed by the state budget but is to be funded fully by the private sector. However, the government may decide to provide incentives to investors in an effort to make this project more attractive. The government will also make sure that investors will not be burdened by bureaucratic difficulties (one of the main obstacles for investment projects in Indonesia). The port is needed as Indonesia’s logistics costs are high. Currently, about 20 percent of a company’s production costs in Indonesia are absorbed by logistics costs, particularly due to expensive transportation costs. According to data from the World Bank, Indonesia’s logistics costs account for 26 percent of the country’s gross domestic product (GDP). In the World Bank’s ‘Logistics Performance Index and its Indicators’ Indonesia ranks 53rd, lagging behind other Southeast Asian markets such as Singapore (5th), Malaysia (25th), Thailand (35th), and Vietnam (48th).

Inefficiencies at Jakarta’s Tanjung Priok port, which handles about two-thirds of the country's international trade, are a major cause for Indonesia’s high logistics costs. Currently this harbour has a cargo dwelling time of 5.98 days resulting in port congestion and additional costs.