Currently, coal certainly ranks among the most interesting commodities. On the one hand, Indonesia expressed its commitment to reduce consumption of this dirty fossil fuel (that is especially used as raw material for the generation of electricity in power plants but also in various manufacturing industries such as the cement industry and textile industry) as the country seeks to become ‘carbon neutral’ by 2060 (although many doubt to what extent Indonesia is really committed to this ambition; after all, it has more immediate concerns such as the dozens of millions of Indonesians living below, and just above, the national poverty threshold).

On the other hand, Indonesia has abundant coal reserves. This makes it a relatively cheap material for domestic electricity generation (also thanks to a regulation that curbs the coal price for usage by domestic coal-fired power plants). Moreover, in combination with strong demand for coal stemming from abroad (triggering high coal prices), Indonesia’s huge coal reserves constitute a lucrative business in terms of exports. In fact, it is unlikely that international coal demand (which specifically stems from China and India) will collapse in the near future since renewable energy sources remain more expensive yet less reliable than coal (or other fossil fuels). And so, coal should remain a lucrative business in (at least) the next two decades or so as advances with renewable energy go at a slow pace.

Especially in the Asia-Pacific, coal-fired power plants remain an efficient solution to the ever-growing energy needs in this region. China, India, Japan, and Indonesia are currently the four countries that – together – account for around 80 percent of coal-fired power plants that are found across the globe. Moreover, recently, Europe has also fallen back on coal amid high natural gas prices, while Japan reopened its doors for coal-fired power plants after the accident at the nuclear plant in Fukushima (in 2011).

High demand has caused international coal prices to soar to record high levels over the past couple of months. Besides higher demand, several supply troubles have also supported coal prices. Heavy rainfall has caused disruptions at dozens of coal miners in China, the world’s biggest producer and consumer of coal. Moreover, diplomatic trouble between China and Australia (which peaked after Canberra pushed for an independent investigation into the origin of the COVID-19 virus) resulted in China refusing to import coal from Australia (which basically meant that supply contracted and demand rose).

In fact, with global coal prices touching record highs, it is actually an incentive for local coal miners in Indonesia (and in other countries) to boost production, which is the exact opposite of the aspirations of environmentalist groups and also contradicts with efforts – found across the globe – to shift from fossil fuels to renewable energy sources.

The full article is available in our October 2021 report. This report can be ordered by sending an email to info@indonesia-investments.com or a message to +62.882.9875.1125 (including WhatsApp). 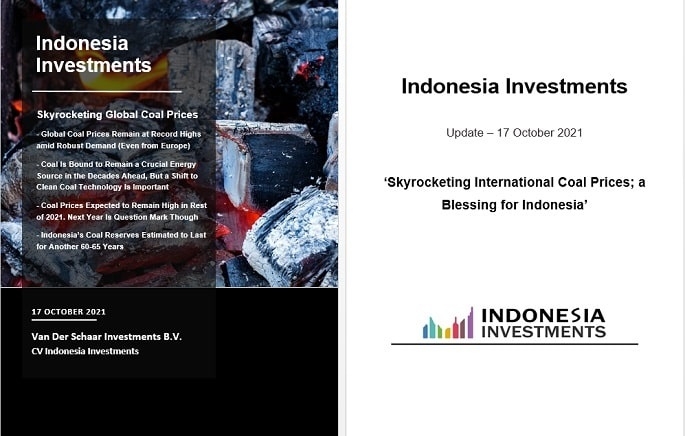