And, we do have to admit that we were surprised to see an impressive 7.07 percent year-on-year (y/y) rebound in Indonesia’s economic growth in Q2-2021, considerably higher than our projection (and an outcome that was very close to the projections expressed by Indonesian policymakers, such as Coordinating Minister for Economic Affairs Airlangga Hartarto or Finance Minister Sri Mulyani Indrawati).

It means that Indonesia now finally – after exactly one year – has exited the economic recession that started in Q2-2020 (its first recession since the Asian Financial Crisis in the late-1990s). This latest recession was caused by the tough social and business restrictions that were imposed – not only by the government of Indonesia but also by various governments around the globe – in response to the COVID-19 pandemic (that had officially reached Southeast Asia’s largest economy at the start of March 2020). Moreover, seeing scary news coverage of this new, fatal and contagious virus (with, initially, an estimated infection fatality rate of between 3 and 4 percent that – fortunately was an example of misinformation released by the WHO) certainly made people afraid to go out and consume (or travel) as usual. It all led to a huge decline in consumption (including tourism), production, investment, and trade throughout the world, including Indonesia (which triggered a sharp increase in unemployment and poverty across the country).

It was Q2-2020 when Indonesia hit its rock-bottom in the COVID-19 crisis with this unprecedented decline in economic activity (recording a massive -5.32 percent y/y contraction in Q2-2020). On a positive note, it means that this year’s second quarter GDP data of Indonesia can enjoy the ‘low base effect’. And, this -indeed- showed with the country’s 7.07 percent economic growth pace in Q2-2021.

The latest GDP data of Indonesia also show that, in the first half of 2021, the economy of Indonesia expanded 3.10 percent (y/y) compared to the same six months a year earlier. This is a good performance given the circumstances (and it is something that is necessary for poverty eradication). However, there is reason to remain wary as the COVID-19 pandemic is not over yet; perhaps even far from over. 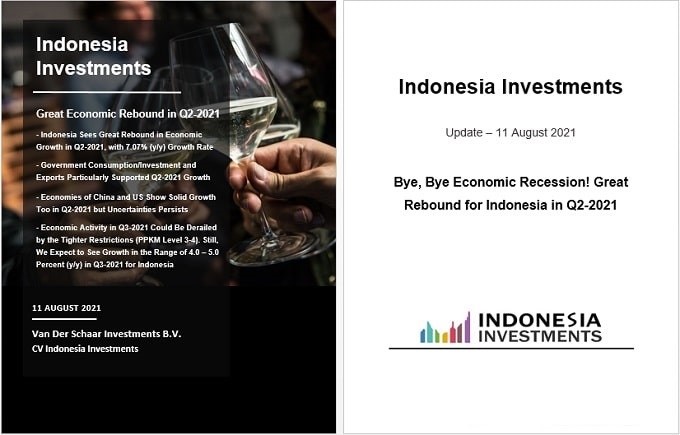