Manufacturing activity in Indonesia contracted for the 10th consecutive month in July 2015 as new orders declined. The Nikkei/Markit purchasing manager’s index (PMI), released on Monday (03/08), fell 0.5 points to 47.3 last month (from 47.8 in June), remaining below the level of 50 points that separates contraction from expansion. Due to deteriorating conditions in the country’s manufacturing sector, Indonesian factories shed jobs at the fastest pace since the survey started in 2011.

New orders from abroad and the domestic market continued to fall in July amid Indonesia’s weakening economic growth, declining customer confidence, and sluggish global economic growth. In the first quarter of 2015, Indonesia’s economy grew 4.71 percent (y/y), the slowest pace in six years. It is expected that economic expansion in Q2-2015 has slightly declined further. Moreover, weak manufacturing in July (the first month of the third quarter) signals that conditions may not have changed yet although costs and charges rose at weaker rates in July. 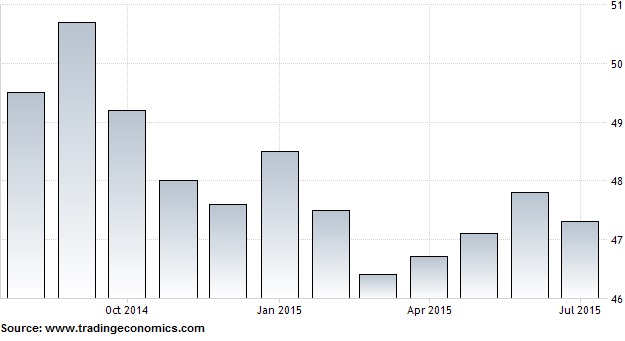