However, growth of new export orders reportedly picked up since May, with demand particularly originating from Europe and America. In fact, upturn in new export orders was solid and among the quickest in the survey's more than six-year history.

Still, improving export orders could not offset the negative impact of bleak domestic demand. Manufacturing production in Indonesia fell for the first time in four months. Meanwhile, payroll numbers fell for the ninth consecutive survey period, but the pace of contraction was only marginal, while panelists noted the non-replacement of voluntary leavers.

Despite the bleak June report, a relatively strong reading for Indonesia's April manufacturing activity means that the average in the second quarter (at 50.5) is higher than that seen in the preceding quarter (at 50.0), implying an improving manufacturing sector in Indonesia so far this year, in terms of quarterly performance.

Pollyanna De Lima, Economist at IHS Markit, said "the upturn in manufacturing was interrupted during June 2017 as weak domestic demand triggered reductions in output and employment. These factors, combined with stagnant order books and a softer increase in input stocks, resulted in a PMI reading that was consistent with worsening operating conditions in the sector.

That said, the PMI average for the second quarter of 2017 was in expansion territory and above the one seen in Q1. This indicates that manufacturing looks set to provide a stronger contribution to GDP than it did in the opening quarter. For 2017 as a whole, IHS Markit forecast economic growth to hold steady at 5.0 percent. 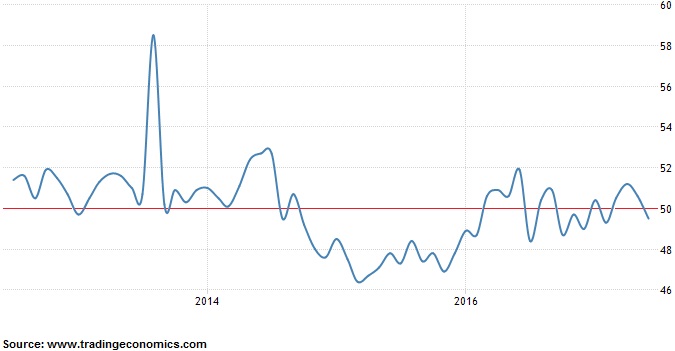