Indonesian exports of textile and textile products have already reached the value of USD $12.4 billion in 2017, exceeding the Indonesian Textile Association (API)'s target of USD $11.8 billion. The final (full-year) 2017 figure is expected to be higher as the last couple of weeks of 2017 are not included in the USD $12.4 billion. Robust textile demand from Southeast Asia and the Middle East was a decisive factor why the target was achieved.

Ade Sudrajat, Chairman of API, announced the latest data. He added that Indonesia's textile exports rose around five percent on a year-on-year (y/y) basis in 2017. This is a great performance because (1) the country's textile exports had been rather stagnant in the 2012-2016 period, and (2) global textile demand actually declined this year.

According to data from API, Indonesian textile exports to the United States and Japan fell 2 percent (y/y), each, in 2017. Meanwhile, demand from the European Union fell 3 percent (y/y). These declines were offset by rising textile demand in Southeast Asia and the Middle East.

Another important factor is that, generally, Indonesia's competitiveness has improved in the textile industry, hence it can offer its textile products at more attractive prices on the world market. Several years ago various textile factories were moved from West Java and Banten to Central Java because minimum wages rose too steeply in West Java and Banten. Central Java, on the other hand, still offers a relatively cheap production environment. 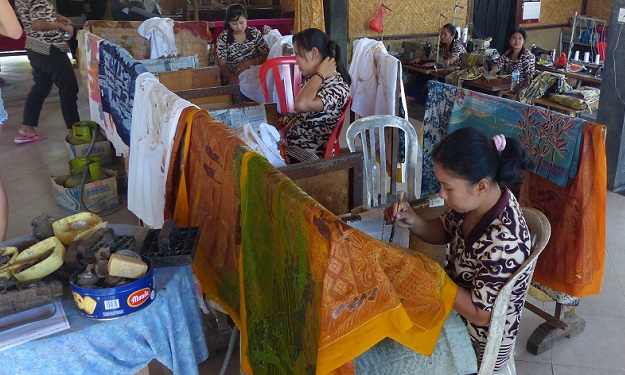 Although demand from the United States fell, the world's top economy remains the biggest market for Indonesian textiles. About 36 percent of Indonesian textile shipments go to the US. On second place comes the Middle East (23 percent), followed by the European Union (13 percent).

A concern for Indonesia's textile industry is that competition from Vietnam is rising. Problematically, and unlike Vietnam, Indonesia does not have a free trade agreement with the European Union. Therefore, Indonesian textile exports to Europe are subject to import duties in the range of 5-20 percent, while Vietnam can export its textile products to this region without import duties. This makes Vietnam's products more competitive and attractive for EU buyers.

Thus, Sudrajat urges the government to focus on bilateral talks with the EU in order to improve the competitiveness of Indonesian textile products further. Indonesian Industry Minister Airlangga Hartarto said the government is currently trying to arrange zero import duties for textile shipments to the US and Australia, while it is also studying the plan to seek a free trade agreement with the EU.