Dutch dredging contractors and marine engineering companies Van Oord and Boskalis have been awarded a contract to design and construct the artificial island off the coast of (North) Jakarta. On this (160-hectares sized) artificial island a new city - called Pluit City - will be developed. The contract, valued at EUR 350 million (split equally between the two Dutch companies) was handed to the Van Oord-Boskalis joint venture by Muara Wisesa Samudra. The project aims to relieve pressure on densely populated Jakarta.

Indonesia’s capital city of Jakarta has more than 10 million inhabitants, thus placing great pressure on the city’s fragile infrastructure. In fact, weak infrastructure is one of the reasons why Jakarta was ranked at the bottom of the Economist Intelligence Unit’s Safe Cities Index 2015. Land reclamation is one of the main strategies to accommodate future generations of Jakartans. Pluit City, which will be built on an artificial island that requires 20 million cubic meters of dredged sand, includes residential and commercial property as well as public facilities, schools, parks, museums and art galleries. Van Oord’s press release mentions that work will commence immediately and is expected to be completed by 2018. 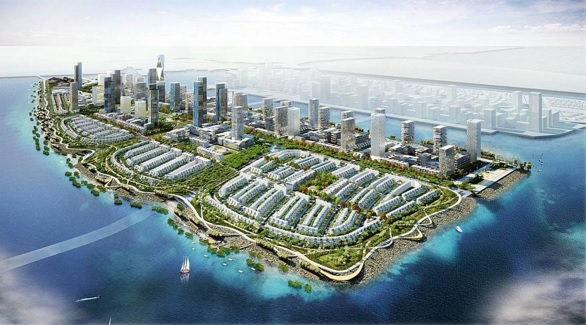 Authorities of Jakarta are increasingly looking to expand into the sea to tackle issues such as flood prevention and urban development. One of the most ambitious projects of the Jakarta and central government is the realization of the USD $40 billion National Capital Integrated Coastal Development (NCICD) masterplan, better known as the Giant Sea Wall, located in the bay just north of Jakarta. Dutch companies also play a crucial role in the NCICD project. Development of the NCICD project is led by a consortium headed by Witteveen+Bos (main contractor) and Grontmij, with subconsultants KuiperCompagnons, Deltares, Ecorys and Triple-A.