The Indonesia Nikkei Manufacturing Purchasing Managers Index (PMI) showed a slight improvement to a reading of 51.7 in May 2018, up from 51.6 in the preceding month, meaning that activity in Indonesia's manufacturing sector expanded last month (a reading above 50.0 indicates expansion, while one below 50.0 indicates contraction). The PMI index measures the activity level of purchasing managers in the manufacturing sector. This survey is closely watched as purchasing managers usually have early access to data about their company's performance, which can be a leading indicator of overall economic performance.

Indonesia's manufacturing activity continued to expand in May 2018 with growth being supported by the fastest rise in new orders since July 2014. Stronger domestic demand conditions were named the key reason for rising new orders. According to anecdotal evidence, manufacturers added new domestic clients.

In contrast, new export orders declined for the sixth straight month in May. This decline in new orders from abroad was attributed to weak demand across global markets. However, the rate of contraction moderated since April's 13-month record.

Inflationary pressures picked up in Indonesia, with input costs rising at the highest rate in more than 2.5 years (October 2015) due to high pressures on the Indonesian rupiah and broad-based US dollar strength. This resulted in higher costs for imports of raw materials. Subsequently, output prices (factory gate prices) rose to the greatest extent since December 2015.

With regard to the foreseeable future, manufacturers are optimistic that output (and general business prospects) will strengthen in the next 12 months. The degree of optimism was at a three-month high, reflecting expected improvements in demand and planned company expansions.

However, Indonesian manufacturing companies reduced their staffing levels in May 2018, albeit at a marginal pace, despite the rise in new order book volumes. This is due to a decline in backlogs of work. Panelists highlighted that there were sufficient resources to ensure the timely completion of outstanding work.

Aashna Dodhia, economist at IHS Markit, was quoted saying: "The improvement in the health of Indonesia's manufacturing sector in May 2018 was the strongest since June 2016, supported by the quickest upturn in new business since July 2014. Panelists indicated that this reflected stronger domestic demand, as global demand for Indonesian goods remained subdued."

He added that "sustained pressure on the Indonesian rupiah materialized into the sharpest increase in input costs since October 2015. May's PMI prices data validate Bank Indonesia's decision to raise the benchmark interest rate for the first time since 2014. It is hoped that the interest rate policy move will help safeguard Indonesia from foreign capital flight and relieve pressures on the rupiah." 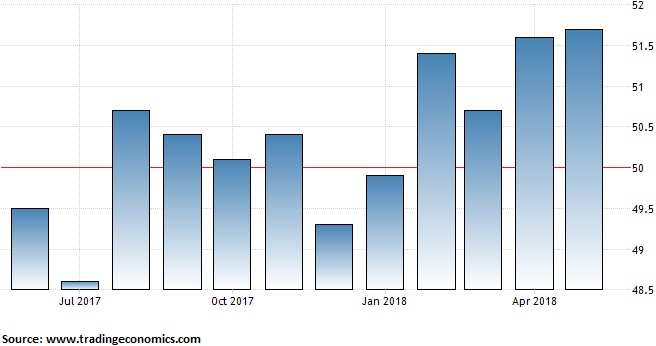