The Indonesian government changed the funding scheme for the construction of the Soekarno-Hatta International Airport Railway project (which will connect Soekarno Hatta International Airport, located nearby Jakarta, and Halim Airport in Jakarta). Previously, it was planned that this project, valued at IDR 26 trillion (USD $2.1 billion), would be offered through a public-private partnership (PPP) construction in which the Indonesian government would finance 55 percent of the costs. Now, however, the project is offered fully to the private sector.

Herman Dwiatmoko, Director General of Railways at the Ministry of Transportation, said that land acquisition (a notorious obstacle for infrastructure projects in Indonesia) and other related matters will also be handed fully to the private sector. The funds that were reserved by the government in the State Budget will now be allocated to finance other railway projects in Indonesia, such as those on the islands of Sumatra and Sulawesi.

After Sarana Multi Infrastruktur, the compant that was appointed to assist the preparation of the Soekarno-Hatta International Airport Railway project, has calculated the required investments, then the project is expected to be tendered in the first half of 2015 (originally the project was to be tendered in August 2014 but due to disagreement between various stakeholders it was postponed until October, and then delayed again). Foreign investors are welcome to participate in the project provided that they establish a joint venture with a local company. However, after the government changed the funding scheme there has been no foreign interest. “Perhaps foreign investors want to know the price that will be charged for a train ticket on the Soekarno-Hatta-Halim line first, before engaging in this mega-project,” Dwiatmoko said. 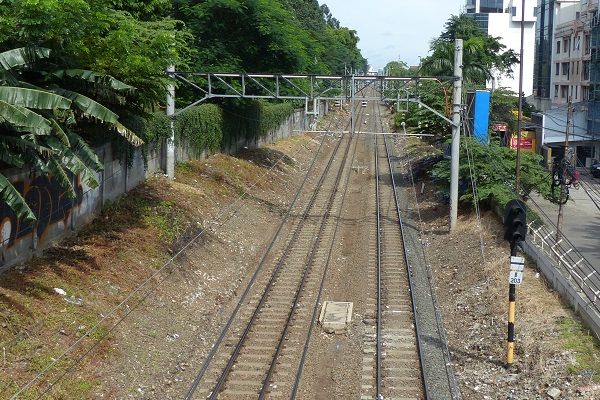 The 33.8 kilometres-long Soekarno-Hatta International Airport Railway project will be constructed to reduce severe traffic congestion around the world’s 8th busiest airport (the government expects that the total number of passengers that pass through Soekarno-Hatta will grow to an annual 80 million by 2020, from 62.1 million in 2013). Currently, Soekarno Hatta International Airport is only accessibly by motorized vehicle. The railway, which will be partly constructed underground, will serve five stations in Jakarta (Halim, Manggarai, Dukuh Atas, Tanah Abang and Pluit) as well as terminals I and II at the Soekarno-Hatta Airport. Total traveling time from Halim (starting point) to Soekarno-Hatta Airport is estimated to be approximately 30 minutes, a significant improvement from the current situation. If construction commences in 2015, then the railway should be operational by 2019 or 2020.