Next month it will be the 60th anniversary of the first Asian African Conference, held in the Gedung Merdeka in Bandung (West Java) between 18 and 24 April 1955. This conference, which is also known as the Bandung Conference, is regarded as a milestone as it was the first time an encounter took place among 29 Asian and African countries - many of which had just gained independence from western colonizers - with the aim to promote Afro-Asian economic and cultural cooperation as well as to oppose (neo)colonialism.

Topics that were discussed at the conference included the reluctance of western countries to consult with the conference members on matters affecting Asia at a time when the Cold War between the USA and Russia reached a climax, concern over tension between China and the USA, opposition to colonialism (particularly French rule in Algeria and French influence in North Africa), and Indonesia's objection to the Dutch possession of the western half of New Guinea (Irian Barat). 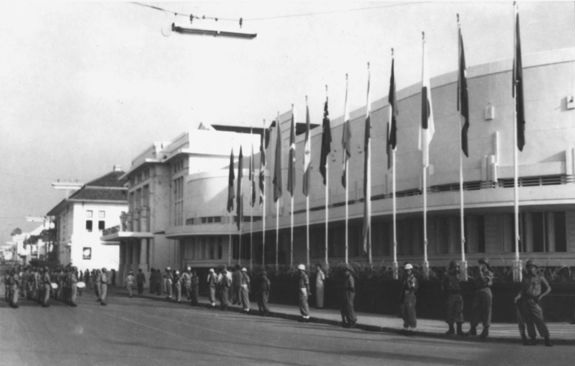 A key result of the conference was the 10 Point Declaration of World Peace and Cooperation (also known as the Bandung Declaration). This declaration included most of the principals of the United Nations (UN).

• Respect for fundamental human rights and for the purposes and principles of the charter of the United Nations
• Respect for the sovereignty and territorial integrity of all nations
• Recognition of the equality of all races and of the equality of all nations large and small
• Abstention from intervention or interference in the internal affairs of another country
• Respect for the right of each nation to defend itself, singly or collectively, in conformity with the charter of the United Nations
• (a) Abstention from the use of arrangements of collective defense to serve any particular interests of the big powers, (b) Abstention by any country from exerting pressures on other countries
• Refraining from acts or threats of aggression or the use of force against the territorial integrity or political independence of any country
• Settlement of all international disputes by peaceful means, such as negotiation, conciliation, arbitration or judicial settlement as well as other peaceful means of the parties own choice, in conformity with the charter of the United Nations
• Promotion of mutual interests and cooperation
• Respect for justice and international obligations

Preparations for the 1st Asian-African Conference

For the leaders of the world. I want to know. What do you think about the biggest issue of the history about the persecution of HUMAN CRIME in china like FALUN GONG, Genocide, ilegal labour, organ harvesting etc. The number of VICTIMS already MILLIONS.Since 1999. It has been 15 years. And its still happening right now.