Therefore, Indrawati remains optimistic that the government's target of 5.4 percent (y/y) growth in full-year 2018 can be achieved, particularly as the national economy will be boosted by the Ramadan month (and subsequent Idul Fitri celebrations) in the second quarter, the 2018 Asian Games in the third quarter, and the IMF meeting on Bali in the fourth quarter. These events should give rise to an increase in consumption. The official Q1-2018 GDP growth figure is scheduled to be released by Statistics Indonesia (BPS) in early May 2018.

When looking at the results and performance of Indonesia's state budget in the first three months of 2018, there are improvements visible (compared to results recorded in the same period one year earlier). State income rose 12.7 percent (y/y) to IDR 333.8 trillion (approx. USD $24 billion) in Q1-2018, particularly supported by a 16.2 percent (y/y) rise in tax income (to IDR 262.4 trillion). One of the traditional fiscal weaknesses of Indonesia is that the government fails to tap the tax revenue potential due to weak tax compliance and weak tax monitoring. Double digit tax income growth is thus a promising sign. However, there is still a long (reform) road ahead for the country to enjoy the fruits of having tax income at full capacity. 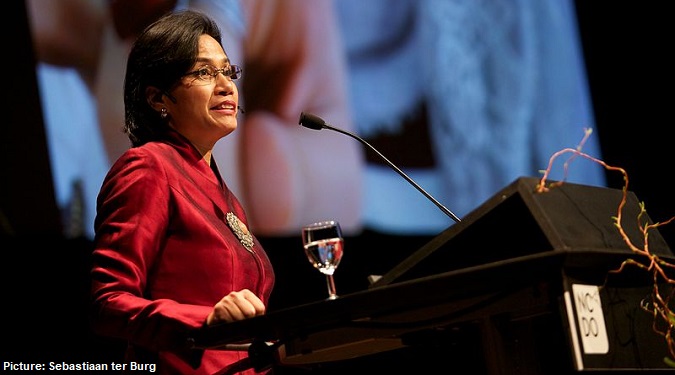 Meanwhile, Indonesia's budget deficit in Q1-2018 was kept at 0.58 percent of GDP, an improvement compared to the 0.76 percent of GDP budget deficit in the same quarter one year ago. Also the primary balance improved to a deficit of IDR 17.3 trillion (approx. USD $1.25 billion), almost half from the IDR 38.7 trillion that was recorded one year earlier. Government debt - as of 31 March 2018 - was maintained at a safe level of 29.78 percent of GDP (IDR 4,136.4 trillion).

Total government spending rose 4.9 percent (y/y) to IDR 419.6 trillion (approx. USD $30.5 billion) in Q1-2018. This also implies that the government managed to spend 18.9 percent of the full-year budget in the first quarter. This is a strong performance for first quarter standards and considering government spending always accelerates in the remainder of the year (and peaking in the fourth quarter), the full-year figure may not be too far away from 100 percent.

In IDR trillion, unless otherwise indicated