In late 2014 Indonesian rubber producers and exporters were not amused when the government of China decided to approve a new standard for compound rubber imports. The permitted crude rubber content in imported compound rubber was cut from 95-99.5 percent to 88 percent, meaning that compound rubber imports into China became subject to a 20 percent import duty (the same tariff as natural rubber import duties). China’s new policy is a blow to its rubber suppliers, which include Indonesia, Thailand, Malaysia, and Vietnam.

Being the world’s largest rubber consumer, China's rubber policies have an influence on the global rubber industry. China’s new policy, which will come into effect per 1 July 2015, will result in declining usage of compound rubber in the world’s second-largest economy although prior to 1 July 2015 we may see large volumes of compound rubber being shipped to China as traders want to take advantage of the current lower import duties.

Amid low global commodity prices - rubber prices touching five-year lows - reduced export earnings due to China’s new policy forms an additional problem for top rubber producers such as Thailand and Indonesia. Moreover, the USA removed Indonesian-made tires from its generalized system of preference. This US program aims to support developing countries by cutting import duties and taxes for about 5000 products from 123 countries. Indonesian-made tires were removed from the list as the USA believes that Indonesia’s tire industry is already sufficiently competitive. This means that tire exports to the USA are now subject to a 5 percent import tax. 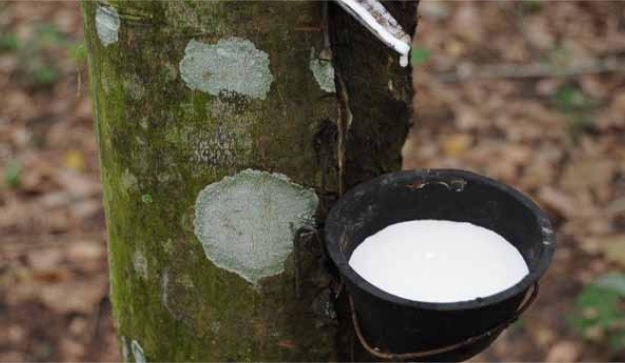 It is also a blow to the rubber industry in the context of the ASEAN Economic Community (AEC) which is to be implemented at the end of 2015. The AEC, which aims to enhance regional economic integration by creating a single market and production base among the ASEAN member states, has high hopes for the rubber industry as the combined production of Thailand, Indonesia, and Malaysia (all ASEAN member states) accounts for nearly 66 percent of the world’s total rubber production. Therefore rubber was selected as one of the key commodities of the region in the context of the AEC, and is to be ‘nurtured’ through the creation of an integrated production base in the key rubber-producing countries in the ASEAN region.

Ahead of the implementation of the AEC, how is Indonesia’s rubber industry today? One the one hand, it is positive. Indonesia is the world’s second-largest rubber producer (after Thailand), implying that the commodity is an important foreign exchange earner, and domestic production is showing an increasing trend. On the other hand, Indonesia has a significantly lower rubber productivity level compared to its competitors. Whereas Thailand produces 1,800 kilogram (kg) of rubber per hectare (ha) per year, Indonesia only manages to produce 1,080 kg/ha. Also Vietnam (1,720 kg/ha) and Malaysia (1,510 kg/ha) have higher productivity.

Indonesia lags behind its competitors in terms of productivity due to the older age of its rubber trees, low investment capability of the country’s smallholder farmers, and due to weaker rubber cultivation techniques. Smallholder farmers account for about 85 percent of total rubber estates in Indonesia, implying that government and large private estates play a minor role in the domestic rubber industry. However, due to limited availability of land/plantations in neighbouring countries, Indonesia has seen the influx of foreign investors (particularly from Singapore and Malaysia) in the domestic rubber industry. Many rubber plantations on Sumatra are already in the hands of foreigners, according to Lukman Zakaria, Chairman of the Indonesian Rubber Farmers Association (Apkarindo).

Another matter concerns the downstream rubber industry of Indonesia. Despite being the world’s second-largest natural rubber producer, Indonesia depends on imports of processed rubber (products) due to the lack of domestic processing facilities and the lack of a well-developed manufacturing industry. Indonesia produces over 3 million tons of rubber per year. However, about 85 percent of production is exported, indicating that domestic rubber processing facilities are still minimal. About half of the natural rubber that is absorbed domestically in Indonesia goes to the tire manufacturing industry, followed by rubber gloves, rubber thread, footwear, retread tires, medical gloves, carpets and other tools.

Given that the government of Indonesia is eager to invest heavily in the country’s infrastructure, there may be opportunities for Indonesian rubber producers. Stakeholders in Indonesia's rubber industry have discussed the possibility of using rubberized asphalt concrete (RAC) for the government’s infrastructure projects. RAC is a “road paving material made by blending ground-up recycled tires with asphalt to produce a binder which is then mixed with conventional aggregate materials. This mix is then placed and compacted into a road surface.” For example, the 2,700 kilometers-long Trans-Sumatra toll road, which is set to see its groundbreaking in April 2015, would be perfect for this material. Indonesian Trade Minister Rachmat Gobel expressed his interest in enhancing domestic consumption of natural rubber, particularly as the price of this commodity had fallen drastically from USD $4.61 per kg in 2011 to USD $1.50 per kg currently.