Rising output and stronger export orders caused a modest recovery in Indonesia's manufacturing sector in August 2017. Indonesia's Nikkei-Markit manufacturing purchasing managers' index (PMI) rose to a reading of 50.7 in August, from 48.6 in July (50.0 separates expansion from contraction in the manufacturing industry).

Indonesian companies scaled up production amid rising orders, both from abroad and at home. In particular new export orders rose (at the second-quickest pace in the survey's near six-and-a-half years history). This is in stark contrast to the situation over the past two months when Indonesia's manufacturing PMI deteriorated. And, in fact, it was the first improvement in the health of the sector since May 2017.

Indonesia's business confidence started to improve from July, while additional inputs were purchased. Stronger increases in input costs and output charges were seen, though in both cases rates of inflation remained below their respective long-run averages.

Manufacturing production in Indonesia grew in August for the first time since May 2017, albeit at a rather modest pace overall. Growth came on the back of higher levels of incoming new work. Factory orders rose, thereby ending a two-month period of contraction. Despite being moderate, the rate of expansion was the strongest in one year. Anecdotal evidence highlighted better demand conditions in the domestic as well as external markets. The upturn in new export orders was the second-fastest in the history of the survey.

Indonesian manufacturers purchased greater quantities of raw materials and semi-finished goods in August, hence reversing the contraction that was seen in the preceding month. However, the pace of growth was modest.

Therefore, payroll numbers continued to decline in August, as they did over the ten preceding months. Nevertheless, the pace of contraction in headcounts softened since July and was only marginal.

Shortages of raw materials, combined with list price adjustments at some vendors, caused another monthly increase in purchasing costs. Part of the additional cost burden was passed on to clients, as highlighted by a further rise in selling prices. Rates of inflation accelerated since July, but were below their respective long-run averages.

The report also states that manufacturers remained strongly confident towards the year-ahead outlook for production, with optimism boosted by efficiency improvements.

Pollyanna De Lima, Principal Economist at IHS Markit, said business conditions in Indonesia improved mid-way through the third quarter as companies benefited from stronger demand for their goods from domestic and externally-based clients. In response to higher inflows of new work, manufacturers stepped up production and purchased greater quantities of inputs in August. The rebound from July's downturn lifted spirits among firms, who are more cheerful about the year-ahead outlook then they were in the prior survey period. 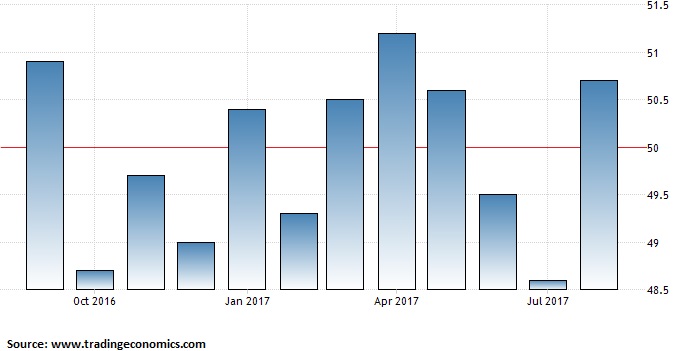