Indonesia's manufacturing sector continued to contract in November 2016 (the second straight month of contraction), albeit at a slower pace. Indonesia's Nikkei Manufacturing Purchasing Managers' Index (PMI) climbed to a reading of 49.7 points last month from 48.7 points in October 2016 (a reading above 50.0 signals expansion of the manufacturing sector, while a reading below 50.0 indicates contraction). Contraction in November was largely blamed on subdued demand and floods in parts of Indonesia.

Order book volumes fell (for a second consecutive month) amid subdued demand in both the domestic and global market. In fact, new export orders fell at the fastest rate since July 2016 amid fierce competition at the global level. Meanwhile, the amount of workers in Indonesia's manufacturing sector was flat from the preceding month.

November data also indicated that businesses had sufficient resources to work on existing projects, as backlogs of work fell for the 13th month running. Moreover, the rate of depletion remained marked.

The weaker Indonesian rupiah (versus the US dollar) exerted upward pressure on input costs in November. For example, prices of imported materials rose. Inflation in Indonesia has been on the rise in recent months but remains weaker than its long-run average. Some companies passed these higher costs on to clients, while other companies commented that competitive pressures weighed on pricing power. Hence, factory gate charges rose only slightly.

According to firms, one factor contributing to the downturn in new business was unwillingness among clients to agree on output charges, which were raised as part of ongoing efforts to protect margins. The weaker rupiah was largely behind the overall increase in cost burdens, pushing up prices paid for imported items. As we head towards the year end, manufacturers may be prepared to loosen their pricing policies in order to secure more work.” 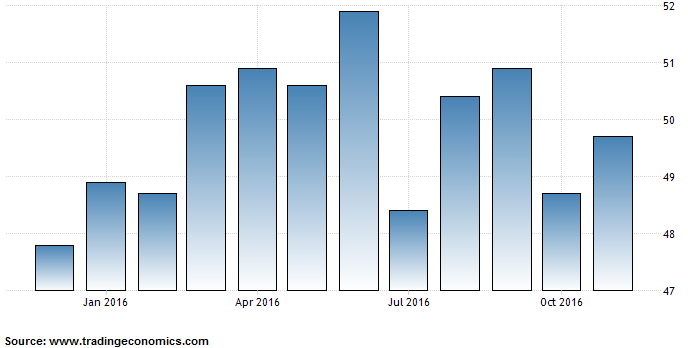