On Tuesday (03/03) the governments of Indonesia and the Netherlands launched a comprehensive five-year public-private partnership (PPP) for enhancing coastal safety at the northern coastal line of Central Java. By joining forces in this 5 million euro project (financed by the Dutch Sustainable Water Fund), mangrove restoration, small scale hard-engineering, and sustainable land use are to result in reduced erosion risk at the coastal area. Key to the project is the use natural protection to strengthen sustainable coastal engineering.

Such natural protection involves the usage of ecosystems, such as mangroves and salt marsh habitats, to enhance coastal safety (combat erosion). By using infrastructure that does not fight against nature, but instead using mostly natural solutions, it is expected to bring more prosperity to local economies such as through enhanced fisheries and carbon storage, as well as being more cost-effective. The cooperation between the Indonesian and Dutch governments is the leading international case of the “Building with Nature Innovation Program”. 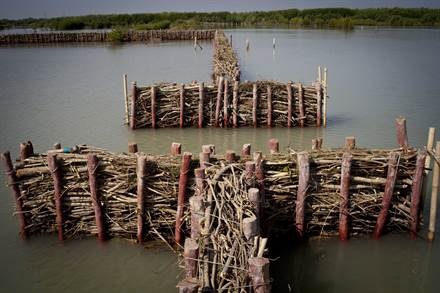 Around 30 million people (in 3,000 villages) suffer from coastal flooding and erosion hazards in Northern Java. The project, which is the follow-up of a pilot project that ended in 2014, focuses on the coastal line in the Demak district where flooding is expected to reach six kilometers inland by 2100 affecting over 70,000 residents. The erosion of the coastal area is primarily the result of the removal of mangrove belts for aquaculture development, unsustainable coastal infrastructures, and groundwater extraction. In some places over three kilometers of land has already been taken by the sea and villages have been engulfed, implying a major loss in local income, reaching up to 60-80 percent in some Central Javanese villages. Moreover, the agri- and aquaculture sectors, key economic engines in Indonesia, also suffer multi-billion losses.