Although there is plenty of opposition to – and criticism on – Indonesia for allowing crude palm oil (or CPO) to play a big role in the domestic economy (Indonesia being the world’s largest producer and exporter of CPO), the country is currently feeling the windfall from soaring CPO prices. And, it is contributing to Indonesia’s recovery from the severe – and still ongoing – novel coronavirus (COVID-19) crisis.

Opposition and criticism has everything to do with the environmental impact of oil palm plantations as they lead to deforestation, habitat degradation, and the loss of animal habitat. This also has political and economic consequences. For instance, this issue has reportedly been an obstacle in achieving the European Union-Indonesia free trade agreement.

However, what people from developed nations need to understand is that countries (governments and populations) will only start caring (more) about the environment when poverty has been diminished significantly, and per capita income is at a solid level. In other words, it becomes much easier to care for the environment if your belly is full and you have enough money to purchase a house and send your children to school (although -ironically- there are studies that conclude there exists a positive correlation between per capita GDP on the one hand, and per capita carbon dioxide emissions on the other hand, suggesting that growing per capita GDP leads to rising carbon dioxide emissions).

Palm oil is one of the world's most produced and consumed oils. Its ‘success’ is that this cheap, production-efficient, and highly stable oil can be used in a wide variety of products, ranging from food, cosmetics to personal care products, and can also be used as source for biofuel or biodiesel.

Indonesia is particularly suitable for palm oil production because the trees require warm temperatures, sunshine, and plenty of rain in order to maximize production.

This (partly) explains why Indonesia dominates the global palm oil supply. Together with Malaysia, Indonesia accounts for nearly 90 percent of the world’s total palm oil output. So, this also means that any disruptions to the palm oil supply – or changes to policies - in Indonesia and/or Malaysia will have a direct impact on global prices.

Read the full article by ordering the April 2021 report. This report can be ordered by sending an email to info@indonesia-investments.com or a message to +62.882.9875.1125 (including WhatsApp). 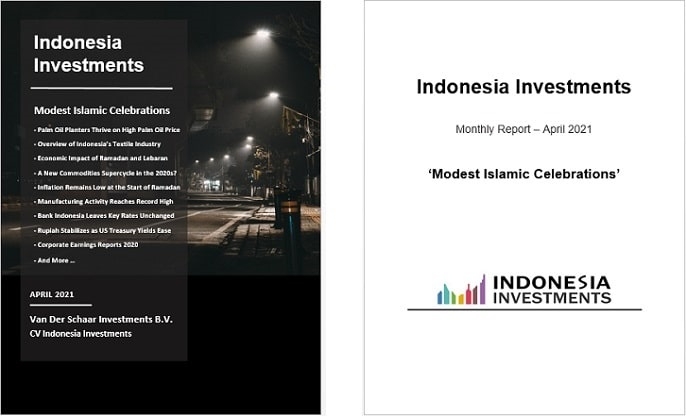