Indonesia is being threatened by deindustrialization. There have been reports that rising minimum wages, the low quality of local human resources, or scarcity of local raw materials have been encouraging companies in certain industries to relocate to other countries in Asia. This partly explains why the manufacturing industry's role toward Indonesia's gross domestic product (GDP) has been on the decline.

A decade ago the manufacturing industry contributed 27.4 percent to Indonesia's GDP. However, the figure fell to 21 percent in the third quarter of 2017, the lowest level since 2000 when Southeast Asia's largest economy started to recover from the severe Asian Financial Crisis.

The Indonesian government should therefore further raise its efforts to encourage investment in the domestic manufacturing industry. Although the government has been eager (and successful) in improving the business climate in Indonesia (including setting limits to minimum wage growth), it can improve conditions further by offering more fiscal incentives and safeguarding enough (and affordable) supplies of gas and electricity.

Meanwhile, the table below shows that Indonesia's Nikkei manufacturing purchasing managers' index (PMI) has difficulty to rise above 50.0 in the first 11 months of 2017, implying there is only limited expansion in the country's manufacturing sector (a reading of 50.0 separates contraction from expansion). 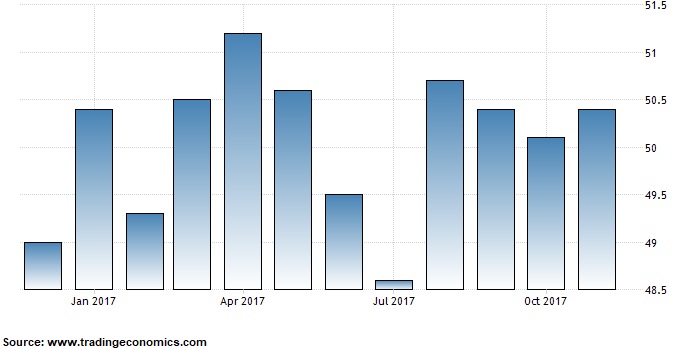 What were the biggest events related to Indonesia's manufacturing industry in 2017?