Today, exactly 49 years ago, Indonesian President Sukarno reluctantly signed a decree that gave full authority to army commander General Suharto to restore order, protect Sukarno and safeguard the Indonesian revolution. This decree, which would become the start of a brand new chapter in Indonesian history (the New Order) as it marked the transfer of executive power from Sukarno to Suharto, became known as Supersemar (Surat Perintah Sebelas Maret, or, the Decree of 11 March).

In the 1960s politics and the economy of Indonesia were in disarray. After Sukarno had introduced his “Guided Democracy” in 1959, thereby replacing liberal democracy (1950-1959), matters quickly deteriorated. Guided Democracy implied that the president had a powerful role with authoritarian tendencies as similar to the content of the 1945 Constitution (which had been in force before the country’s experiment with liberal democracy). Due to various opposing forces in Indonesian politics - nationalists, Islamic parties, communists and the army - politics and the economy failed to bring fortune to the young nation.

Through Guided Democracy Sukarno thought that the political standstill could be overcome. He created “Nasakom”, a concept that refers to the union between the three most important ideological streams in Indonesian society in the 1950s and early 1960s: nationalism (nasionalisme), religion (agama), and communism (komunisme). However, these streams had little in common, and in fact harbored deep resentment towards each other. It was up to Sukarno's political skills, charisma and his status as a national hero to try and keep these streams together, while at the same time trying to keep the army (which viewed itself as the saviors of the nation) from becoming too strong. 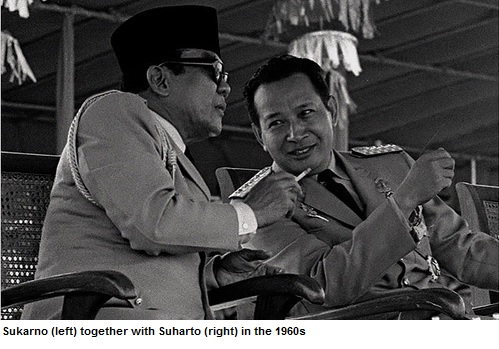 This political cocktail of Sukarno was a ticking time bomb. Tensions between the army, communists, nationalists and Muslim groups heightened and would result in a coup which largely remains a mystery today. On the evening of 30 September 1965 six army generals and one lieutenant were kidnapped and killed by a group of leftist officers who called themselves the 30 September Movement (Gerakan 30 September). Allegedly, these seven murdered army officers were planning a coup to topple Sukarno.

However, there has never been any clear evidence that these seven officers were planning a military coup against Sukarno. Moreover, there is also no clear evidence that the communist party (PKI) was behind the pre-emptive strike to prevent the military coup. And yet, Suharto, then head of the Strategic Reserve Command (Kostrad), immediately put the blame on the PKI. Soon (suspected) communists were slaughtered across Central Java, East Java, Bali and North Sumatra (estimates of the number of victims vary between 400,000 and one million people). It is suspected that the killers of these communists were army units, civilian gangs (who received weaponry from army units) and the militant Ansor youth wing of the Nahdlatul Ulama (a political party). These killings continued through 1965 and 1966.

Meanwhile, starting in early 1966, the army organized anti-Sukarno student demonstrations in a move to increase chaos in the capital city of Jakarta and thus increase pressures on Sukarno. In these hostile circumstances Sukarno reluctantly signed the Supersemar decree at the insistence of the army. The signing took place at the presidential palace in Bogor, 60 kilometers south of Jakarta.

Shift of Power: Consequences of the Supersemar

Now having far-reaching powers, Suharto quickly banned the communist PKI party the following day, and about one week later fifteen Sukarno loyalist ministers were arrested by the army. Suharto then changed the composition of the Provisional People's Consultative Assembly (MPRS) and barely one year later this MPRS voted to remove all of Sukarno’s political powers and appointed Suharto as the country’s new acting president. Within two years after the signing of Supersemar, Suharto had gained all power and had become Indonesia’s second president (a position he would hold until May 1998). 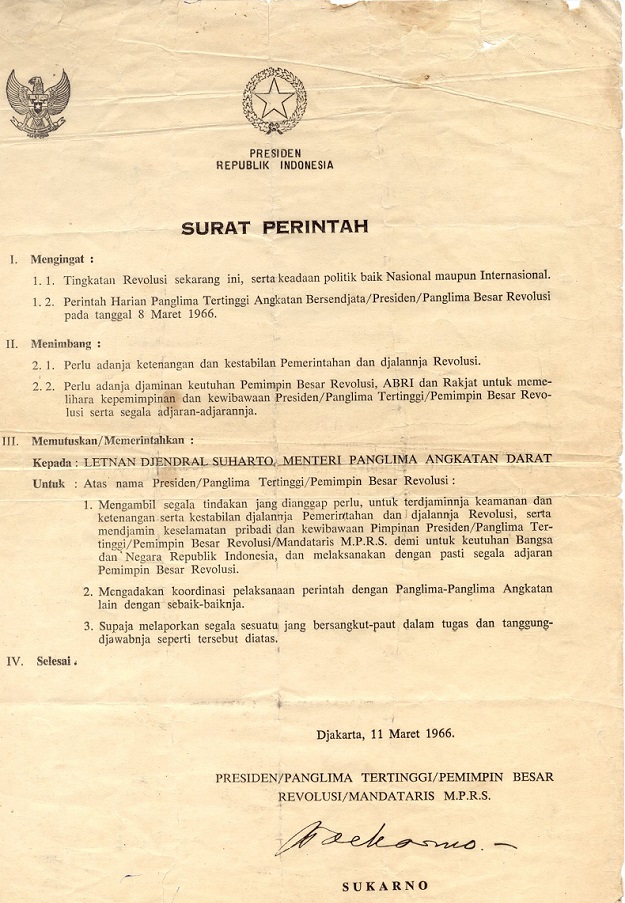