Indonesia’s stock market continues to struggle in attempts to find a bottom, as recent declines have been propelled by lower-than-expected GDP figures. For the first quarter, annualized growth of rates of 5.07 percent indicated a slight miss relative to the consensus estimates for the period (5.18 percent). Primary weaknesses were seen in export markets, where slowing demand for key commodities (such as coal and palm oil) indicated contraction for the first time since 2016.

In these reports, it is clear that continual China-U.S. trade war disputes and mounting concerns of a global growth slowdown have weighed on investor sentiment. Southeast Asia's largest economy is heavily dependent on its commodities exports, and a widening trade deficit has dampened the outlook. This likely explains the extended market reaction to sell equities with exposure to the region, and the Jakarta Composite Index has now erased all of its year-to-date (YTD) gains for 2019.

However, several economic factors still remain favorable for Indonesia and it is likely that investors will begin to move back into regional stocks now that valuations have reached discounted levels. Upticks in household and government spending figures were bright points in the most recent reports and the prospect of lower interest rates in both the United States and the European Monetary Union (EMU) could bring improved demand for Indonesia’s commodities exports in the second half of this year. 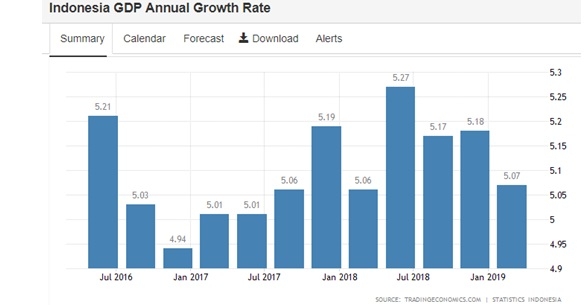 Additionally, we must remember that Indonesia’s broader growth rates remain elevated on a comparative basis. To be sure, first quarter’s increase of 5.07 percent was below analyst expectations for the period. But this metric remains comfortably within the averages generated over the past three years, and first quarter’s figure is higher than the growth rates posted during the same period in 2018.

Despite recent weaknesses in regional stock markets, Indonesia’s economic growth performances should remain firm throughout 2019. Private consumption remains stable, retail sales figures were very robust during the first quarter, and consumer inflation rates have dropped to their lowest levels in nearly a decade.  Furthermore, tourist arrivals to Indonesia were buoyant during the initial parts of this year and this suggests generalized sentiment might not be as weak as it seems. 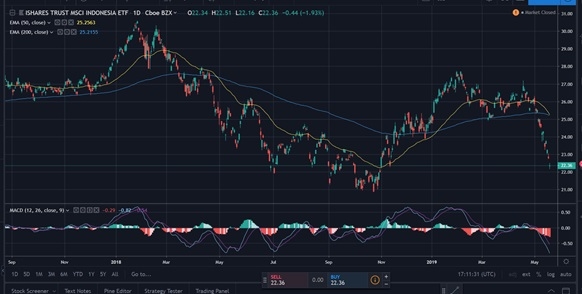 Ultimately, this suggests investors can find excellent opportunities to buy Indonesian stocks while valuations remain below near-term averages. Optimistic expectations rest on the country’s underlying strength in private consumption and investment. Moreover, trend reversals in the external sector may improve as import growth eases (following the surge from last year).

One way to assess potential changes in investors sentiment is through inflow activities directed at exchange-traded funds devoted to the region. Over the last 52-week period, the iShares MSCI Indonesia ETF (NYSEARCA: EIDO) shows inflows of $47.3 million. This puts the fund near the top of its category for exchange-traded funds and it suggests valuations could move higher in the next few months.

Similar trends can be found in the VanEck Vectors Indonesia Index ETF (NYSEARCA: IDX) over the most recent 4-week period. Trading volumes for the IDX ETF are much lower than its counterpart in EIDO but the reversals in investor activity suggest markets may already be working in anticipation of a long-term bottom for Indonesian share prices. Looking at the price charts, IDX does not find major support levels until markets reach the $18.80 level. But this is just 4.66 percent below current market prices, which suggests these instruments may not have much further to fall before buyers start to return and seek value.

Potential risks to the bullish outlook could be seen with delays to new infrastructure projects, continued China-U.S. trade tensions, or changes in momentum in the global growth outlook. Current expectations for GDP growth in Indonesia are hovering near 5.1 percent for 2019, and 5.2 percent for 2020. As long as there are no significant deviations from these projections, negative trends for Indonesia stock markets should see upside reversals in the months ahead.