The micro, small, and medium enterprises (MSMEs) of Indonesia are an interesting phenomenon. Why? Well, let’s take a look at three remarkable statistics:

These are all very impressive figures, although one could certainly argue that when 99 percent of existing businesses are MSMEs, their contribution to the economy at 61 percent is possibly somewhat mediocre. Nonetheless, it does remain appropriate to call the MSMEs the backbone of the Indonesian economy as they generate so much economic activity, including the harvesting, making and delivery of basic necessities -such as food- to almost the entire population. Try imagining an Indonesian economy without the presence of the MSMEs, and everything would (sort of) collapse as their presence is so influential, both in urban and rural environments. 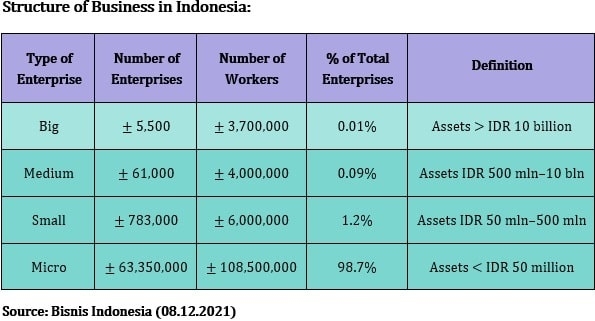 However, besides their somewhat modest impact on the country’s total economic growth at 61 percent of GDP, it is also remarkable that they are poorly integrated into the world’s supply and value chains, and thus their contribution to Indonesia’s total export performance is also rather weak.

Last year, Yulius, who is Expert Staff to the Minister of Cooperatives and SMEs for Productivity and Competitiveness, stated on the IDX Channel that the MSMEs only contribute about 14 percent to total Indonesian exports, which is a much lower ratio compared to those seen in other countries. For example, in Singapore, the MSMEs account for 41 percent of the country’s exports, while in China the MSMEs account for 60 percent of exports.

The weak involvement of Indonesian MSMEs in export certainly tells us something. It is a strong indicator that Indonesian MSMEs lack competitiveness compared with regional counterparts. Key factors that come to mind are:

This is the introduction of the article. To read the full analysis, you can purchase this article seperately or purchase the whole July 2022 edition of our monthly report (which includes this article). For further information you can contact us through info@indonesia-investments.com or +62.882.9875.1125 (including WhatsApp text messages). 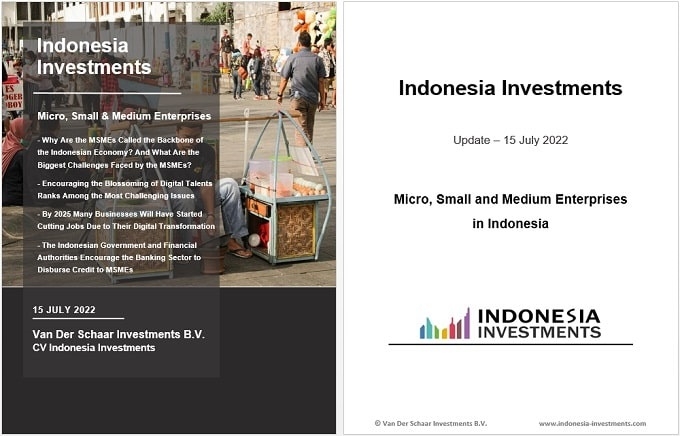