The economic and social consequences of the COVID-19 crisis are becoming increasingly clear and frightening. All the self-imposed restrictions on business and social behavior, taken by governments across the world, may protect people’s health to a significant extent, but the policy measures also have devastating economic and social consequences as economic activity nosedives, and businesses collapse. This results in unprecedented mass layoffs as well as growing poverty.

In recent weeks various countries have released very poor Q1-2020 economic data, and considering the biggest impact of COVID-19 restrictions will be felt in Q2-2020, concern about the global economy has (rightfully) soared. Some of the forecasts for Q2-2020 economic growth, in specific countries, are just truly jaw-dropping (more about this topic below).

As the economic and social damage becomes increasingly evident around the world, there has also emerged rising criticism of governments’ restrictive policies. After all, governments need to realize that the sudden and drastic rise in unemployment and poverty (as a consequence of the self-imposed restrictions) also takes a human toll. In fact, it could even exceed the ‘direct’ death toll of COVID-19, if restrictions last too long.

Therefore, policymakers are facing a huge dilemma now: loosen the restrictions per direct, and thereby jeopardizing the lives of the vulnerable in society (in particular the elderly and those with weakened immune systems or weakened health), or, keep restrictions in place, but kill a growing number of companies and businesses (and thereby causing massive job losses along the way). The policymakers who face this dilemma are not to be envied as any decision(s) they make will lead to casualties.

Various alarming news reports and data surfaced related to the global economy. For instance, Japan’s economy officially entered a recession (defined as two consecutive quarters of negative economic growth) with its adjusted real gross domestic product (GDP) contracting by 3.4 percent year-on-year (y/y) in the first quarter of 2020. And considering Japan’s response to the COVID-19 health crisis intensified in the second quarter, we should expect a significantly worsening picture in Q2-2020. A number of analysts even predict a contraction of more than 20 percent for Japan’s economy, the world’s third-largest economy, in Q2-2020. That would be jaw-dropping, indeed!

The economy of the United States (USA) fell 4.8 percent (y/y) in Q1-2020 (a bigger drop than analysts had previously estimated). It was the first negative GDP reading for the US since the 1.1 percent (y/y) contraction in Q1-2014, and the lowest reading since the 8.4 percent contraction in the last quarter of 2008 (during the worst of the financial crisis). Consumer spending, non-residential fixed investment, exports, and inventories were the biggest drags on the US economy in the first quarter of 2020. But if the Q1-2020 data, which only include a few weeks of economic lockdown, are already quite weak, then the Q2-2020 numbers are bound to become quite scary.

In fact, the economy of the USA could even shrink by 30 percent (y/y) in Q2-2020 according to Federal Reserve Chairman Jerome Powell, adding that unemployment numbers could resemble the situation in the 1930s when the US unemployment rate peaked close to 25 percent. Nonetheless, Powell remains somewhat optimistic that the nature of the COVID-19 crisis – coupled with the dynamism of the USA and the strength of its financial system – should pave the way for a strong rebound, possibly starting in the second half of 2020.

Meanwhile, also in April 2020, we had learned that China’s economy shrank by 6.8 percent (y/y) in the first quarter of 2020, the country’s first contraction since 1992, as production and spending were frozen amid the lockdown. What is different in the case of China though (compared to other countries) is that it (most likely) passed its weakest point in Q1-2020, and can now focus on restarting economic activity. Near the end of April 2020, China, the initial epicenter of the COVID-19 crisis, said it had no more coronavirus patients in its hospitals. Hence, contrary to other countries, it can seek to restart its economy in the second quarter of 2020. This in fact gives China a huge advantage. Something ‘the world’ needs to be alert to is whether China will now try to acquire fundamentally strong Western companies that are on the brink of collapse due to the COVID-19 restrictions.

Still, the above indicates that the world’s three biggest economies are experiencing massive economic and social troubles, the size of which we have not seen before in recent history. This has far-reaching consequences (which are estimated to peak in the second quarter of 2020) for the entire world.

On a positive note, at the time of writing this introduction, several countries are now planning to wind down COVID-19 restrictions (for example in Western Europe) as the number of COVID-19 patients and fatalities have eased significantly over the past few weeks. However, the big question is whether looser policies will lead to another peak in infections in subsequent weeks. And another question is whether the looser policies can cause a sudden boost in economic activity, or the people simply remain too scared to go out and consume.

The Case of Indonesia

While we expected Indonesia to post a sound GDP growth figure of approximately 4.0 percent (y/y) in the first quarter of 2020 (as the country was relatively COVID-19-free in Q1-2020), the official figure turned out to be a meager 2.97 percent (y/y). This is a very bad omen for second quarter growth considering Indonesia imposed large-scale social and business restrictions in various cities, regencies and provinces in April 2020 (including the economic centers of Jakarta, West Java, and East Java).

At the time of writing this introduction (at the start of June 2020) these restrictions were still in place. Hence, second quarter economic growth will be heavily disturbed for at least two months (and possibly three months if the self-imposed restrictions are extended). Considering we are in unchartered waters it is difficult to make exact and substantiated estimates. However, we would certainly not be surprised in case Indonesia’s economic growth contracts between 5 and 7.5 percent (y/y) in Q2-2020.

But what is remarkable is that in mid-May 2020 Indonesian Coordinating Minister for Human Development and Culture, Muhadjir Effendy, stated that the Indonesian government is considering loosening the large-scale social restrictions (in Indonesia called Pembatasan Sosial Berskala Besar or PSBB). This is a remarkable statement considering the number of COVID-19 patients in Indonesia is currently still showing exponential growth. This could actually be a sign that, contrary to the trend seen in Western Europe and the USA, the Indonesian government is not willing to fully sacrifice the national economy. Shopping malls across Jakarta, for example, are now planning to re-open starting from 5 June 2020.

Particularly in an emerging market like Indonesia the near standstill in economic activity can be a fatal threat as millions of people fall into full-blown poverty, while the government has very limited social safety nets available to support these people.

The problem is that Indonesia not only has around 25 million people living below the poverty threshold, but also has dozens of millions of people living just above this threshold, implying that an economic shock will easily and rapidly push them into full-blown poverty. In fact, the COVID-19 crisis can trigger such a huge economic shock that even those who had been living relatively comfortably above the poverty threshold may fall into poverty. After all, it are the micro, small, and medium-sized businesses in particular that are facing significant challenges amid the crisis, and are typically very vulnerable as they have limited liquidity.

The Indonesian government indeed announced generous tax incentives and social assistance spending. However, it will certainly not be enough to cover the majority of the country’s micro, small and medium entrepreneurs (and their staff) as it does simply not have the necessary resources to subsidize wages of the millions of people involved in these businesses.

According to a projection by Indonesia’s National Development Planning Board (or Bappenas) and the University of Indonesia's (UI) public health experts, Indonesia could see up to 240,000 COVID-19 deaths, without a high degree of intervention, and without taking into account medical intervention and treatment. Although this is a big number (and a lot of personal drama), it needs to be weighed by the Indonesian government whether it is worth destroying the national economy, pushing millions of local micro, small and medium-sized businesses into bankruptcy, causing millions of Indonesian workers to become fired, while pushing millions of Indonesians into full-blown poverty. The consequences of prolonged social and business restrictions could actually take more casualties than these estimated 240,000 COVID-19 deaths, especially on the long run.

It is a dilemma no one wants to face (being between the devil and the deep blue sea). But it does seem like the Indonesian government is somewhat shifting its priority towards safeguarding the economy as it now reportedly plans to loosen the business and social restrictions, while at the same time the number of new COVID-19 cases is still rising exponentially across the country.

But even, hypothetically, if the business and social restrictions were to be scrapped altogether, today, by authorities, then the national economy cannot simply resume were it left off in, say, March 2020. Consumer behaviour, for instance, is expected to have changed (at least for the next year to come) as people remain concerned about COVID-19. We expect people to avoid visiting crowded places and avoid traveling in 2020, and possibly also in 2021. This puts the brakes on economic activity and on the economic rebound.

For many businesses the new economic landscape after the COVID-19 crisis (the so-called ‘new normal’) will be challenging, very challenging, and therefore companies now need to critically examine their business models and the markets they serve (as well as the products or services they offer) in order to survive the new reality.

This is the introduction to our May 2020 edition. To purchase the report, please send an email to info@indonesia-investments.com or a WA text message to +62(0)8788.410.6944 for further information.

Take a Glance Inside the May 2020 Report: 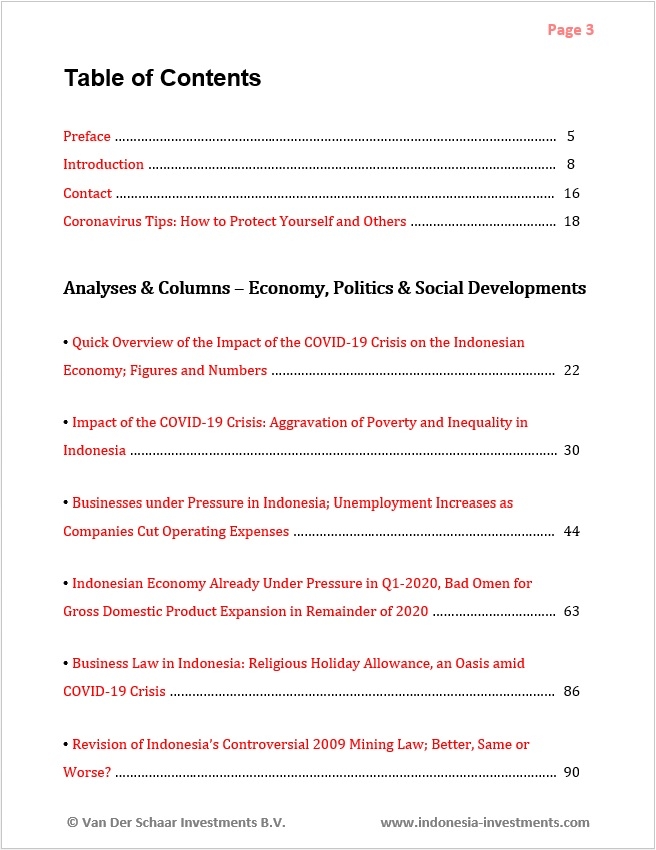 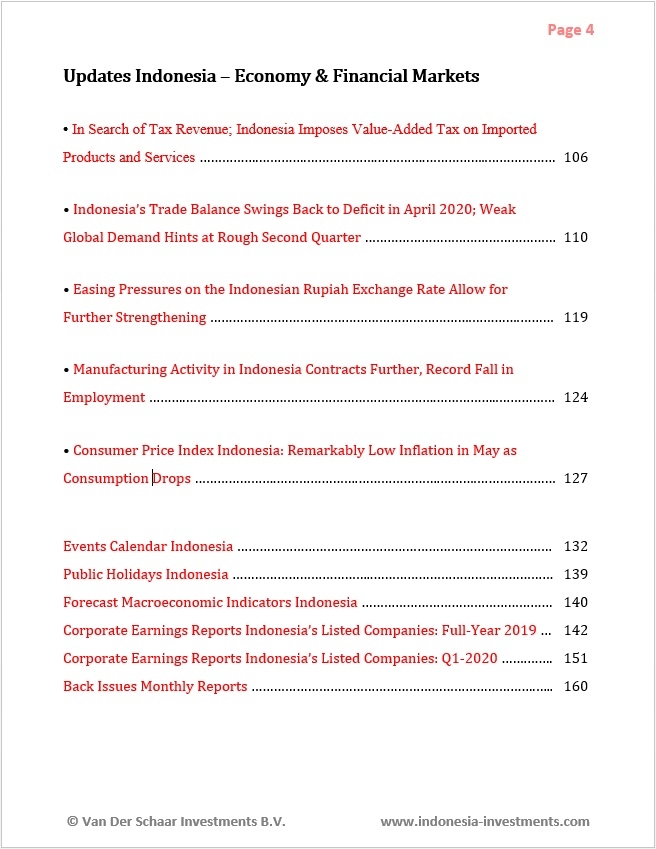