Recent elections in Indonesia have met with a great deal of attention and look to be a decisive moment for the country. We are looking at a country that has major financial problems and also is making a decision about the direction of its democracy. Prabowo Subianto has pledged to conduct a rollback in some of the aspects of Indonesia’s democracy. So the supporters of Indonesian democracy will be watching very closely to see how the recent election events will unfold.

But investors should also be watching very closely, as there could be some key developments here as well.

“In debates prior to the presidential election,” said Vlad Karpel, options strategist at TradeSpoon, “Prabowo repeatedly sent mixed signals on his attitude towards democracy, telling Indonesians that democracy might not be culturally compatible with Indonesian traditions.” The messages have conflicted, however, as the former army general also told diplomats that he is definitely a democrat - and not an autocrat - and that he will obey the constitution if elected. But he didn’t say whether or not he will try to change the constitution, so we really don’t have a good sense of what Prabowo would try to do when he gets into office.

What are Prabowo Subianto’s Intentions?

But the more important question is: “What will he be able to do?” Indonesia’s political system is likely to put up a fight with Prabowo tooth and nail if he tries to cut back on some of the privileges of, for example, the legislature or the constitutional court. Prabowo ran a well-funded campaign and is of course tied to the Suharto regime. He has admitted that as head of the strategic reserve command (Kostrad) he has expressed his throughs through the kidnapping of student activists. These are surprising scenarios. How was a person with this very controversial history be able to narrow the lead that other presidential candidate Joko Widodo enjoyed in April 2014? Clearly, it looks as though the political framework in Indonesia is in store for continued challenges with respect to its underlying grassroots democratic movements.

Prabowo ran an extraordinarily effective campaign, turning some of his liabilities (like his human rights record) into assets by telling the Indonesians that he is the firm leadership that the country needs at this particular moment in history. Many Indonesians accept that Prabowo has checkered history on human rights but they say those things are in the past and that they are willing to let it go.

After the legislative election, it was clear that this was Joko Widodo’s race to lose. Unfortunately for him, his campaign was poorly organized and poorly funded, frequently running off schedule and leaving supporters waiting for hours to meet him. It also relied primarily on a dispersed network of volunteers as opposed to the party infrastructure, which was reluctant to support him because he didn’t come up through that party infrastructure. In contrast, Probowo has been good at giving very nationalistic, bombastic speeches that have been able to rouse audiences. Jokowi has been much more soft-spoken and hasn’t excited the same level of passion when he’s been campaigning through the countryside. 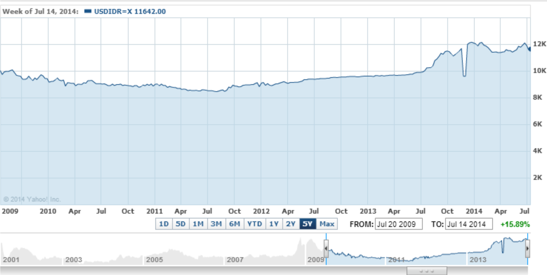 It should be added that many Indonesians do not and continue to consider that Prabowo’s destructive human rights era a very important part of his record, as this will continue to influence the value of the rupiah in its longer term trends. Some of the best analysis in this area can be found in the daily forex strategy analysis at FXPips. The campaign that he has run has been extraordinarily effective and extraordinarily well-funded. In getting out the vote, he used his two media magnates who offered support through their television stations, reaching about a 40 percent share of the Indonesian market. This extended reach has shown Prabowo growing authority within the country. So even if the does not see the outcome the wants, it is clear from this election that Prabowo’s reach is growing within the country, and that there are some real obstacles for democracy going forward.