While the 2024 legislative and presidential elections are still far away, we do expect Indonesian media to increasingly cover this topic in 2022, particularly if the COVID-19 pandemic eases, before this topic will really dominate national media in 2023.

The reason why the 2024 elections are bound to become a (particularly) hot topic is simple: because of the two-term cap, incumbent Indonesian President Joko Widodo cannot compete in the upcoming presidential election, implying that – after ten years – Indonesia will see a new leader. This therefore brings some uncertainty because it is not impossible that a new leader will take a new approach, especially in young and diverse democracy like Indonesia; one that is markedly different from the approach used his/her predecessor (although we highly doubt to see any big changes in policy direction, for example the infrastructure push or foreign relations, after 2024). Still, it is worth presenting an update on the 2024 elections.

For a political party, or coalition of political parties, to nominate a presidential and vice-presidential candidate (which is a fixed, inseparable pair), Article 222 of the 2017 Elections Law stipulates that at least 20 percent of the seats in the House of Representatives (DPR), or 25 percent of the popular vote in the previous election, need to be secured. This is a very high threshold, meaning that very few pairs can be nominated for the race.

There are Indonesian politicians who urge this threshold to be eased to the range of 10-15 percent (or removed altogether) as it would allow more candidates, thereby perhaps even limiting polarization in society (in both the 2014 and 2019 elections Indonesian society was heavily polarized, with religious tensions being particularly present, resulting in well-respected religious figure Ma’ruf Amin acting as Widodo’s sideman in the 2019 election). Having a lower threshold would also mean that the big parties (PDI-P, Gerindra, and Golkar) can, each, nominate their own candidates. On the other hand, the threshold aims at reducing the arrival of too many possible candidates as that, too, would complicate the whole process.

Read the full article in the December 2021 report. This report can be ordered by sending an email to info@indonesia-investments.com or a message to +62.882.9875.1125 (including WhatsApp). 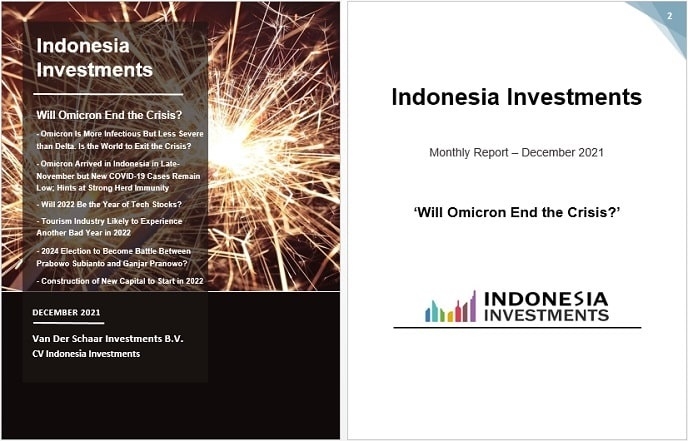