While Indonesia is still in the middle of the COVID-19 crisis, albeit – most likely – set to exit the economic recession in the second quarter of 2021 due to the so-called low base effect, and while Indonesian consumers continue to display reluctance to spend (reflected by 16 consecutive months of contracting retail trade on an annual basis), the Indonesian government expressed its intention to raise Indonesia’s Value-Added Tax (VAT, or in Indonesian: Pajak Pertambahan Nilai, abbreviated as PPN).

The proposal to raise Indonesia’s VAT was set in the Indonesian Finance Ministry’s ‘Work Plan for the Year 2022’. This proposal is part of a fiscal reform program in the country’s tax structure, aimed at raising tax revenue for the Indonesian government, and thereby bringing the central government’s budget deficit back below 3 percent of gross domestic product (GDP) by 2023. Hence, it is an act of fiscal consolidation.

There are three key reasons why the Finance Ministry of Indonesia plans to raise the VAT rate.

Read the full article in the May 2021 report. This report can be ordered by sending an email to info@indonesia-investments.com or a message to +62.882.9875.1125 (including WhatsApp). 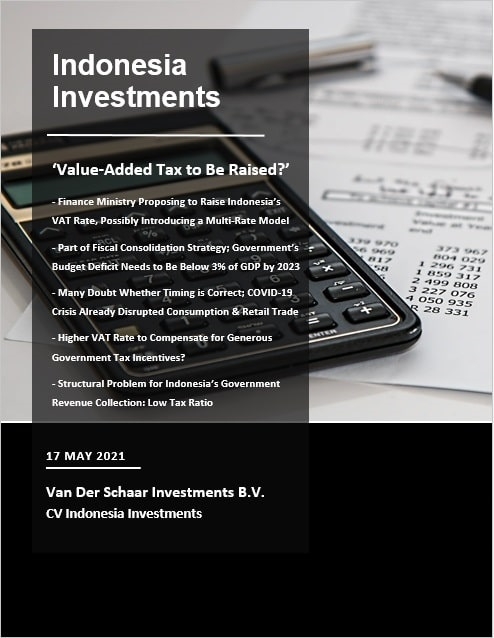