Indonesia's Industry Ministry is optimistic that the nation's manufacturing activity will improve in the second quarter of 2017, primarily supported by rising production in Indonesia's automotive and food & beverage sectors amid the Ramadan month and subsequent Idul Fitri celebrations. This period always triggers a peak in consumption due to the many food parties (especially in the evening). Moreover, car and motorcycle sales tend to rise ahead of the Idul Fitri period when millions of Indonesians travel back to their places of origin to spend a few days with their families.

Airlangga Hartarto, Indonesian Industry Minister, said the automotive and food & beverage sectors have good opportunity for growth in the second quarter of the year because they can benefit from rising domestic demand amid the Ramadan and Idul Fitri festivities. Other sectors, however, have to rely on the global market for growth as, overall, consumer purchasing power in Indonesia is yet to improve significantly. Problematically, external demand remains bleak and therefore Indonesian sectors such as footwear or electronics are showing a declining performance so far this year. More problematically, in these sectors domestic industries have to compete with imports from foreign counterparts.

Adhi Lukman, General Chairman of the Indonesian Food and Beverage Association (Gapmmi), said rising demand during Ramadan and Idul Fitri is a seasonal phenomenon. Demand for food and beverage items rises in the range of 15 - 20 percent during this period. However, demand is not only met by domestically produced food and beverage products. Part is met by imports from abroad. These imports can be very attractive, in terms of price, because Indonesia is not as competitive compared to Malaysia, Vietnam, Thailand and China. Due to lower production and logistics costs foreign products can thus sometimes be offered at a cheaper price to Indonesian consumers than the products that are actually produced in Indonesia.

In 2016 Indonesia had to cope with a USD $800 million food and beverage trade deficit, primarily caused by massive imports from China and Thailand. Eko Listiyanto, Economist at the Institute for Development of Economics and Finance (Indef), said the government should not keep doors wide open for food and beverage imports during the Ramadan and Idul Fitri period because it undermines the momentum that is presented to domestic industries. In April 2017 manufacturing activity in Indonesia rose, a sign that domestic manufacturers were ready to supply the market. However, as many traders imported cheaper food and beverage products from abroad, manufacturing activity slowed in May. 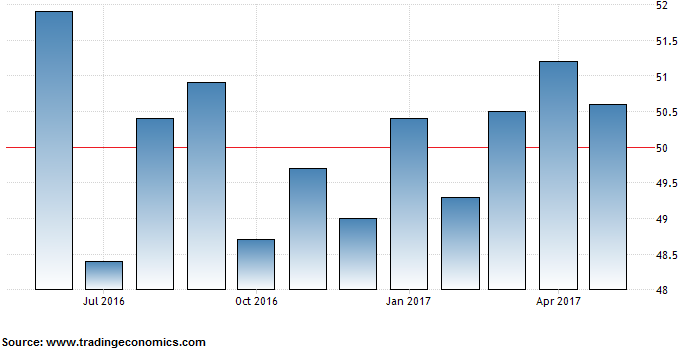 Read more: Growth of Manufacturing Activity in Indonesia Eased in May 2017