The manufacturing industry of Indonesia is in need of a boost as its contribution toward Indonesia's gross domestic product (GDP) has declined from 28.0 percent to 20.8 percent of GDP over the past decade. An underdeveloped manufacturing industry gives rise to a fragile economy as Indonesia remains highly dependent on raw commodity exports and on the services industry. This causes problems in times of low commodity prices and Indonesians' weak purchasing power. Preferably, the manufacturing sector accounts for at least 35 percent of GDP.

To reach that figure it will require at least 25 years of hard work. Data from Indonesia's Industry Ministry show that the domestic industry sector is currently growing at a slower pace than Indonesia's overall economy: while the Indonesian economy expanded by 4.92 percent (y/y) in the first quarter of 2016, the industry sector only expanded by 4.07 percent (y/y) over the same time.

According to data from Indonesia's Statistic Agency (BPS), the number of Indonesian workers in the industry sector stands at 15.3 million people, or 13.3 percent of the total national workforce (114.8 million). For comparison, the agriculture sector of Indonesia provides employment to some 37.7 million Indonesians (32.9 percent of the full work force).

A strong industry sector would therefore not only create employment opportunities for the millions of unemployed Indonesians (there are currently 7 million Indonesians without a job) but would also turn the Indonesian economy into a more stable economy, provided that export-oriented domestic industries are developed.

Syarif Hidayat, Secretary General at Indonesia's Ministry of Industry, stated that Indonesian industries are experiencing a slowdown due to both internal and external matters. Internally, Indonesians' weak purchasing power causes lower demand for manufactured products, while - externally - demand is curbed due to the sluggishly growing global economy. Given these circumstances Indonesia's Industry Ministry expects that a 5.5 percent (y/y) growth pace in 2015 will be the maximum limit for the industry sector in 2016. However, to achieve this target it requires hard work and it would surely help if global and domestic economic conditions improve as well as a successful tax amnesty program. Last year, Indonesia's industry sector expanded by 5.04 percent (y/y).

Indonesian Industry Minister Airlangga Hartanto, who replaced Saleh Husin in last week's cabinet reshuffle, stated that his goals are to boost industrialization in Southeast Asia's largest economy and to enhance the competitiveness of Indonesia's small and medium-sized industries so that they can compete with imported goods from foreign counterparts. Meanwhile, the red carpet is being rolled out for foreign investors (through tax incentives), particularly for those who invest in labor-intensive industries. Meanwhile, investment is also key to develop import substitution industrialization, particularly for steel and petrochemicals.

Ahmad Heri Firdaus, Economist at the Institute for Development of Economics and Finance (Indef), stated that although industry remains the largest contributor to Indonesia's economy, its percentage share is on the decline over the past decade. This is not caused by flat or negative growth of the industry sector but occurred because other sectors are growing more rapidly, particularly Indonesia's services sector (that grows up to 10 percent year-on-year, almost double the growth pace of the industry sector). This is a concern as well as a missed opportunity because a developed manufacturing industry would absorb a large amount of workers.

Indonesia Manufacturing Industry needs lot of changes in the Government policies.
without the change there is no scope of improvements. On the other hand I surprise to note that about the unemployment level at Indonesia. which is about 7 million Indonesians as mentioned in this article.
This statement is absolute stupidity and the Ministry should not worry about this.

The Ministry has to note that, there are plenty of job opportunities available in Indonesia, but people don't want to take up jobs. They want more salary without doing jobs. Check up with the Industries that how many hours the Indonesian really works in a day?. Most of the Manufacturing Industries will reveal the truth that, they don't even work fully 6 hours in a day. The Indonesian just want to relax by playing on line games in their hand phones. Could Indonesian government can take any action on this?. The other fact is that, the Females are more workaholic in the manufacturing Industry in Indonesia. they are more enterprising than the Males.
The Government has to make strict rules in the constitution against such peoples attitudes this country will never achieve the growth. Also it is kind request to the Economist and Professors that, don't pass or make a statement to the Ministry without knowing the facts and don't miss-guide the Government authorities.

Indonesia needs to set up strong supply chain research center. Every industry should have a target to export certain percentage this would bring innovation. There should be more of Agribusiness programs in Universities. The Steel Sector should learn from New Zealand Steel. Like Malaysia they should consider going for Blue Ocean Strategies in various Ministries and other organisations.
Prof.Moin Uddin: Supply Chain Management Research Center , Institute of Business Management, Karachi 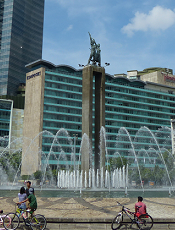