A report by Markit Economics, released this morning (01/07) states that business conditions improved for Indonesian manufacturers in June 2016 as order books rose. This made local manufacturers boost output and hire additional workers. This rise in employment can be regarded a signal that Indonesia's goods producers expect to see demand growing structurally in the foreseeable future (second half of 2016). Markit economist Pollyanna De Lima added that "a stronger increase in costs combined with better demand conditions is likely to lead Indonesia's goods producers to further increase their own charges in the near term.

Markit's higher manufacturing PMI in June is a relieve for investors as there occurred an unexpected stagnation in May 2016. This sudden stagnation caused some concern as Indonesia had just ended a 17-month streak of manufacturing contraction. These concerns proved in vain. In combination with expected accelerating economic growth in Indonesia, domestic demand is expected to rise accordingly. 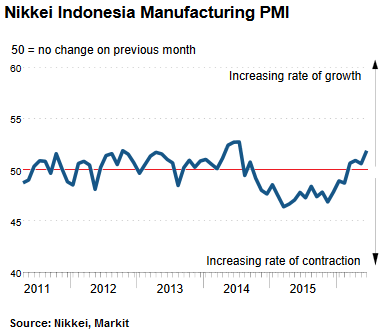 However, external demand for Indonesia's manufactured goods decreased in June 2016, implying global demand remains subdued. Markit remarks: "nevertheless, the rate of contraction [of external orders] eased to the weakest in the current 21-month sequence of falls".