Indonesia is a vast archipelago that is home to 270 million people. Indonesia is also an emerging middle income country that is experiencing rapid economic expansion, industrialization, and urbanization. These are three interrelated processes that give rise to ever-growing demand for energy, particularly in combination with the huge population (Indonesia being the world’s fourth most populous nation, after China, India, and the United States).

Economic growth, industrialization, and urbanization are also the key ingredients to create new employment opportunities for the population, with as subsequent result: declining poverty and an expanding middle class. When people have more money at their disposal, they are bound to start using (more) electrical appliances, such as smartphones, air-conditioners or refrigerators. Hence, demand for electricity grows. They may also buy a motorcycle, or car, to make it more convenient to travel to their workplaces, and thus demand for fuel rises.

However, with around 25 million Indonesians still living below the national poverty line today, while an even larger group lives just above this threshold, it also means that in the years – even decades – to come, millions and millions of Indonesians will enter the middle class (provided Indonesia’s economic growth will remain strong), hence energy demand will rise accordingly.

Similarly, when rapid economic growth is fueled by investment realization as well as growing demand from the domestic market (or from abroad) for a wide range of domestically produced goods and services (including the arrival of a rising number of foreign tourists), then electricity and fuel demand grows accordingly. Factories will need to boost production amid the expanding economy, while factories’ growing output needs to be transported to wholesalers, retailers, and end-consumers. It all adds to energy demand. It is the task of the Indonesian government to make sure that the energy supply is sufficient. If not, then it disrupts the country’s economic and social development.

And, in fact, specific government programs lead to significantly rising demand for power across the vast Archipelago. For instance, the Indonesian government targets to push the country’s electrification ratio (which refers to the number of households that is connected to the nation’s electricity grid) to (nearly) 100 percent before the end of 2020. Over the past decade, this ratio has actually soared. While back in 2010 it stood at a mediocre 67 percent, the ratio almost touched 99 percent at the end of 2019 (although there is concern about the quality of the electricity supply that is added to the grid; a topic we discuss in the relevant chapter in this report).

Also the government’s push for the development of smelting facilities (smelters) in the mining sector (which is an effort to cut the country’s dependence on mineral ore exports) prompts growth of demand for energy sources (particularly coal as many of the newly built power plants are coal-fired; an attractive option for a country that has ample coal reserves at its disposal). In 2019, a total of 17 new mineral smelters were opened across Indonesia, while for 2020 eight new mineral smelters are set to start operations.

Considering the context that is presented above, the big challenge for the Indonesian government is to cater to businesses and people who need a rising amount of power in their daily activities and operations, thereby allowing further economic and social development of Indonesia. If the government fails to deliver the necessary additional power, then economic and social development is heavily disrupted.

The role of the Indonesian government is crucial for the country’s power generation for two key reasons:

(1) direct public investments, and
(2) providing a conducive investment environment in which the private sector players are willing to invest, especially in capital-intensive and long-term projects.

In this energy research report we discuss a range of topics that are at the heart of Indonesia’s energy sector, such as the supply and demand conditions of Indonesia (and how these conditions are projected to develop in the foreseeable future), the Indonesian government’s energy programs, targets and ambitions, and overviews of Indonesia’s key energy sources (such as crude oil, natural gas, coal and renewables). Furthermore, we also pay plenty of attention to the regulatory framework because – in our opinion – the key obstacle that has been undermining investment realization in the energy sector of Indonesia is regulatory and legal uncertainty.

But besides policy flip-flops, rapidly and sometimes rigorously changing regulations, and legal uncertainty, there are other issues that are undermining the attractiveness of Indonesia’s investment and business environment: a high degree of bureaucracy (red tape), weak coordination and cooperation between separate ministries or the central and regional authorities, low quality of governance in the regions, relatively low productivity of Indonesian workers, uncertainty about minimum wage growth, corruption, and the lack of adequate (soft and hard) infrastructure development. As a result, direct investment realization is below par. Moreover, in the case of energy or natural resources, growing resource nationalism in Indonesia’s political domain is complicating matters further. All above topics are discussed in relevant chapters.

However, in order to end this introduction on a more positive note, the Indonesian government is undertaking various efforts to improve the investment environment, and also seems to have become well aware of the importance to attract investment in renewable energy. However, so far, the country has failed to tap this potential. But – like in most other sectors – Indonesia does hold great potential for development of energy (particularly renewable energy), and therefore it remains an interesting investment destination, despite the challenges.

We always label investment in Indonesia as ‘high risk, high gain’, meaning there is plenty of profit potential for (foreign) investors, but there are also plenty of pitfalls. This particularly applies to those investors who have no previous experience with Indonesia. Fortunately, risks can be reduced to a certain extent. Solid preparation is crucial, including the study of quality analyses of Indonesia.

This is where Indonesia Investments aims to contribute. By offering quality, up-to-date, and objective information, we aim to make investors aware of the potential as well as the pitfalls of investing in Indonesia. This research report is among the tools we offer to (potential) investors.

This research report is the result of a decade of experience in Indonesia’s business and investment environment as well as three months of in-depth study of the energy sector of Indonesia. But, it is also based on our daily life experiences as residents of Indonesia and as travelers across the country. Because one can learn a lot by simply observing when traveling across the country.

Power outages, for instance, are still a daily affair in most regions outside Java and Bali (the two islands where the power infrastructure is most developed), showing that the power supply is not sufficient. While back in the 1990s it was common for many foreigners to always carry a lighter in their pocket when traveling outside Java and Bali (including non-smokers), ready-for-use when there is a power outage in the evening, today awareness of looming power outages makes us eager to always charge our smartphones, iPads, and laptops to the maximum when traveling outside Java and Bali [2]. More of these personal experiences are available in relevant chapters.

Lastly, we want to mention here that the ongoing coronavirus (COVID-19) crisis has had an impact on the writing process of this report as information gathering and data collection became a bit more challenging. The social and business restrictions that have been imposed by the government (specifically the Jakarta Administration) made it more difficult to meet policymakers, decision-makers, and specific experts. Meanwhile, a number of organizations and companies have delayed the publication of certain data and reports due to the COVID-19 pandemic.

Moreover, considering the COVID-19 is still ongoing and unfolding we do not include the impact of the COVID-19 crisis on Indonesia in the analysis of this report. At this point we still regard the COVID-19 crisis as a temporary hiccup that in the short term causes a massive loss of economic activity (and energy demand) as well as a drastic rise in unemployment and poverty. In the long term, however, we do expect ‘things to get back to normal’, including demand for energy. While the COVID-19 crisis does cause structural changes – such as the rapidly accelerating growth of Indonesia’s digital economy – we do not see similar developments in Indonesia’s energy sector at this point (yet). While in the European Union (EU) the COVID-19 pandemic allows room for national governments to force a more rapid transition to sustainable and environmental corporate management, we do not detect this in Indonesia.

[1] We do need to admit that power outages still frequently occur on Java too. However, usually they only last for a few seconds or a few minutes.

You can order Indonesia's energy sector research report by sending an email to info@indonesia-investments.com or by contacting the following phone number: +62(0)8788.410.6944 (incl. WhatsApp).

The report is an electronic report in a PDF file. In case you prefer to receive a hard copy, we can deliver it too but - depending on your location - there is an additional fee. 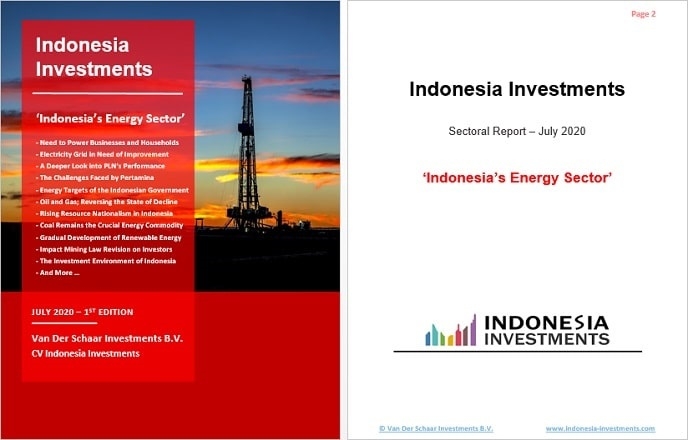