Astra International is often called the barometer of the Indonesian economy as the company has business activities in basically all main sectors of the Indonesian economy. Hence, if the company's earnings show good growth, then chances are big that Indonesian gross domestic product (GDP) also expanded strongly. Sharp net profit and revenue growth of Astra International in Q1-2017 should therefore translate to strong GDP growth in the same quarter (Indonesia's Statistics Agency is set to release Indonesia's official GDP figure in early May).

United Tractors, Indonesia's largest distributor of heavy equipment (and a subsidiary of Astra International), even saw a 105.5 percent (y/y) rise in net profit, supported by recovering commodity prices that boost demand for heavy equipment in the mining and agricultural sectors. In case commodity prices continue to recover in the remainder of 2017, then these are the companies that will see sharply rising shares.

Meanwhile, several top Indonesian banks reported solid earnings in the first quarter of 2017, presumably supported by the central government's tax amnesty program that was completed at the end of March 2017. However, non-performing loans (NPLs) have been rising in Indonesia's banking sector and therefore banks may be a bit cautious when it comes to credit disbursement in the remainder of 2017. This will somewhat limit their profitability.

The only exception (see table below) is Perusahaan Gas Negara (PGN) which reported a 3.80 percent (y/y) decline in net profit to USD $96.8 million in Q1-2017. This decline is attributed to the still volatile crude oil prices.

However, there are doubts about whether shares of these companies can rise significantly in the next couple of months (especially banking and retail stocks). Firstly, because the benchmark Jakarta Composite Index has recently experienced strong growth and therefore now trades at expensive valuations. Secondly, in the May-June period stock trading in Indonesia tends to be a bit bleak amid the Ramadan and Idul Fitri celebrations.

Indonesia's benchmark Jakarta Composite Index managed to hit another all-time high on Wednesday (26/04) after the index rose 0.81 percent to 5,726.53 points. 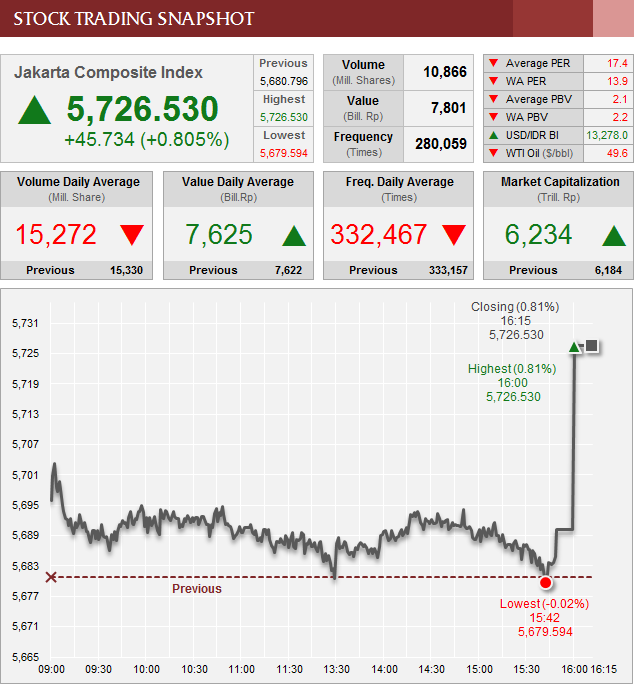