Indonesian stocks went downhill on Monday (09.03.2020) while stock markets around the world are crashing. The Jakarta Composite Index fell 6.58 percent to 5,136.81 points on the first trading day of the week, its lowest level since December 2016.

Crude oil prices tumbled 31.5 percent (the biggest slide since 1991) to nearly USD $30 per barrel in early trading on Monday, before somewhat recovering toward USD $37 per barrel during the day. The key factor that causes diving oil prices is the failure of the Organization of the Petroleum Exporting Countries (OPEC) last week to clinch a deal with its allies - including Russia - to cut crude output further in an effort to boost prices.

Meanwhile, the number of new coronavirus (COVID-19) cases surged above 110,000 worldwide as the outbreak spread to more countries. Italy in fact took drastic measures by sealing off large parts in the north of the country, effectively quarantining 16 million people, including financial capital Milan. 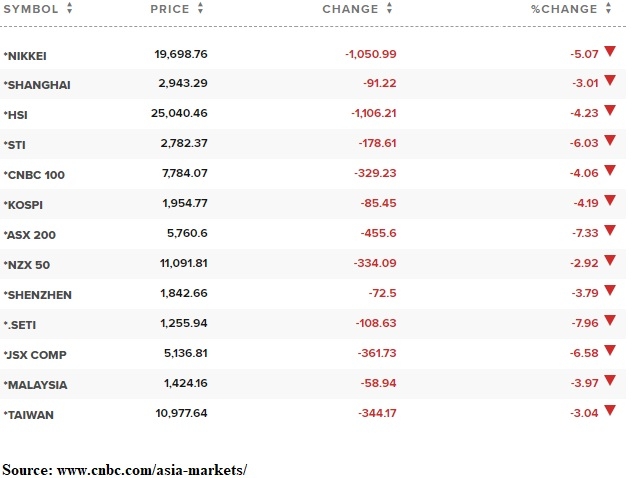 Meanwhile, emerging market currencies also had a rough day on Monday, particularly due to the massive drop in oil prices. The Indonesian rupiah weakened 1.05 percent against the US dollar to USD $14,392, and 2.28 percent versus the euro (to EUR 16,412). Rupiah weakness makes it difficult for Bank Indonesia to cut its benchmark interest rate further (in an effort to boost economic growth). While a sudden (half percentage point) Federal Reserve rate cut last week seemed to have opened up possibilities for Bank Indonesia to engage in monetary easing, chances have waned significantly now we entered a oil war, while the new coronavirus outbreak may deteriorate in the days and weeks ahead.