In the World Bank's latest Indonesia Economic Quarterly (June 2018 edition) there are plenty of positive words about the Indonesian economy, such as robust economic growth, low inflation, rising investment, growing government spending, and prudent monetary policy. However, the World Bank also detects some "substantial and mostly external" risks that lurk about. Below is the summary of the World Bank's latest Indonesia Economic Quarterly, entitled "Learning More, Growing Faster".

Indonesia's economic growth continued to expand at a robust pace of 5.1 percent year-on-year (y/y) in the first quarter of 2018. Growth came on the back of strong investment. Higher global commodity prices spurred stronger investment, especially in machine, equipment, and vehicles. As a result, gross capital fixed formation grew by 7.9 percent, the fastest pace in more than five years.

Higher growth in machinery investment also led to a further pickup in imports, which grew more than twice the pace of exports, and acted as a drag on growth. Meanwhile, private consumption growth remained flat at 5.0 percent, despite early signs of recovering retail sales. Growth on the production side was broad-based, and gross value added at producer prices accelerated in the quarter.

Inflation eased in Q1-2018 on base effects. Headline consumer price inflation slowed to an average of 3.3 percent (y/y) in Q1-2018, the lowest quarterly average since Q4-2016. Core inflation also fell from Q4-2018's average of 3.0 percent to 2.7 percent in Q1-2018. Lower headline reading was largely due to smaller increases in housing, electricity, gas, and fuel prices, because of high base effects in Q1-2017 due to electricity tariff hikes. Food price inflation, however, has been rising.

Tighter global financial conditions and increased volatility contributed to capital outflows and a depreciating rupiah. With the normalization of US monetary policy projected to accelerate, global financial conditions have tightened faster than expected, resulting in bouts of volatility among emerging economies in recent months. US policy tightening has led to substantial portfolio outflows, resulting in a balance of payments deficit of 1.5 percent of GDP in Q1-2018, the first deficit in two years. Because of Indonesia's relatively high exposure to foreign portfolio investors, who hold 40 percent of Indonesia's domestic government debt, yields and the rupiah were under pressure: Indonesian bond yields rose 21 basis points in Q1-2018, while the rupiah reached a 31-month low against the US dollar. Expectations of a larger current account deficit linked to faster investment growth also pressured the currency. 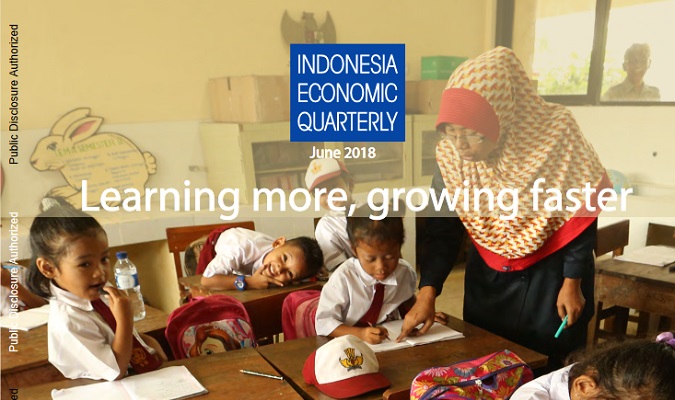 A sound macroeconomic policy framework provides buffers against rising global volatility. Monetary policy has been sound, keeping real interest rates in positive territory and anchoring inflation expectations. Most recently, despite stable inflation, Bank Indonesia (BI) raised interest rates twice, 25 bps each time, to signal its commitment to stability. Record-level reserves and bilateral swap agreements enable BI to provide support to the rupiah, although the central bank has appropriately not targeted a specific level for the currency. In addition, the rupiah remains 5.3 percent stronger than in January 2014 in real effective terms, following an extended spell of real appreciation post Taper Tantrum. Macroprudential measures, notably those related to hedging of foreign currency exposure by corporates, further contributes to resilience. Even though fiscal deficits have been well contained, a fiscal consolidation has been targeted for 2019, an election year, as a further sign of commitment to stability. Four credit ratings upgrades in the past twelve months corroborate the country's improved economic environment, fiscal management, and overall credit worthiness.

The outlook continues to be largely positive, but risks are increasing. As global economic growth is projected to slow and trade flows moderate from recent highs, Indonesia's GDP growth is projected to reach 5.2 percent (y/y) in 2018. Private consumption is expected to pick up modestly, while investment growth is projected to remain robust, considering the continued strength of commodity prices. Given the import-intensive nature of investment, net exports will continue to weigh on economic growth, as exports growth slows in line with easing global trade. Risks to the outlook are tilted to the downside amid the continued tightened monetary conditions and bouts of financial volatility centered around more vulnerable emerging economies, such as Argentina and Turkey.

Headline inflation is expected to remain low this year and edge up in 2019 because of higher import costs associated with higher crude oil prices and a weaker currency. Government revenues are expected to increase gradually, as critical revenue enhancing reforms are implemented, boosting total collections and enlarging fiscal space for additional spending.

Downside risks to the outlook are substantial and mostly external, including continued volatility in the financial and capital markets, and slower global trade. While the continued normalization of US monetary policy to date has been proceeding in a relatively orderly manner, there is still a significant risk of further volatility in global financial and capital markets. The rapid rise in US yields has already sparked financial distress in Argentina and Turkey. Such continued volatility could cause financing costs to hike even more sharply for emerging economies. At the same time, with trade protectionism on the rise, there is a real risk that the recent acceleration in global trade could stall, weighing on Indonesian exports and hence growth. Further escalation in protectionist measures and sentiment could lead to an even larger drag of the external sector onto Indonesia’s economic growth.