Since several generations, Van der Schaar is active in the world of real estate - both national and international; a tradition that is continued to this day by the initiators of Indonesia Investments, being direct descendants of the founder of a business empire - Heere van der Schaar.

Heere van der Schaar (1882-1970) had his residence and office in J.W. Brouwersplein, currently known as the Concertgebouwplein in Amsterdam (the Netherlands). This area forms part of the property development around the Concert Hall and surrounding neighborhood - one of his first major property projects in Amsterdam - and one that made him an established name as a property developer in the first half of the 20th century.

As developer, private contractor and architect/engineer, Heere van der Schaar contributed significantly to the expansion of the city of Amsterdam during the 1920s. A substantial part of his property development forms part of the 'Amsterdam School' (a well known stream in international architecture) and is listed in the register of Dutch National Monuments.

Plan-Zuid (Plan-South) was a masterplan developed by Hendrik Petrus Berlage (a prominent Dutch architect). The first phase of his masterplan involved a housing plan in South Amsterdam, totaling 2000 houses, that was executed by a consortium named the Amstels Bouwvereeniging (Amstel Building Association). Heere van der Schaar was the initiator of this consortium which consisted of around 65 small construction companies. 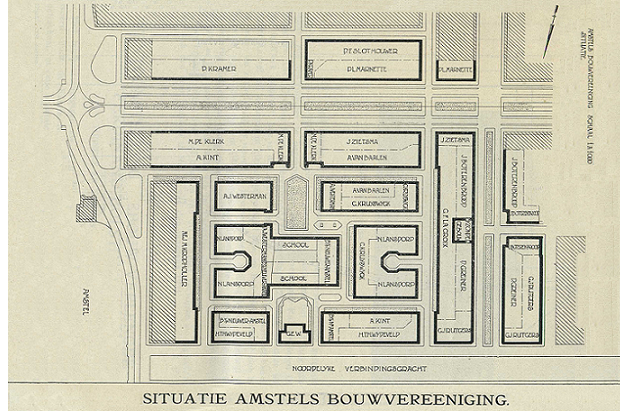 On the initiative of Heere van der Schaar, Berlage's Plan-South was followed by a new plan called Plan West or Plan Van der Schaar - involving a 6000 housing plan - with Mercatorplein as center (and Berlage again as architect). This plan was developed and executed successfully within the timespan of a couple of years only. Architects that contributed to Plan-West were from the Amsterdam School such as Kramer, Wijdeveld, Staal, Kropholler, Van der Meij and Berlage. The municipality of Amsterdam maintained its monitoring role through the establishment and insertion of a supervisory/aesthetic commission which - for those days - constituted a remarkable example of public-private partnership between the developer (Heere van der Schaar) and the local government (Amsterdam). 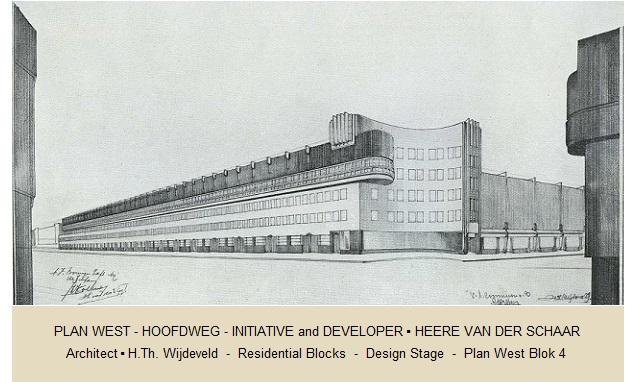 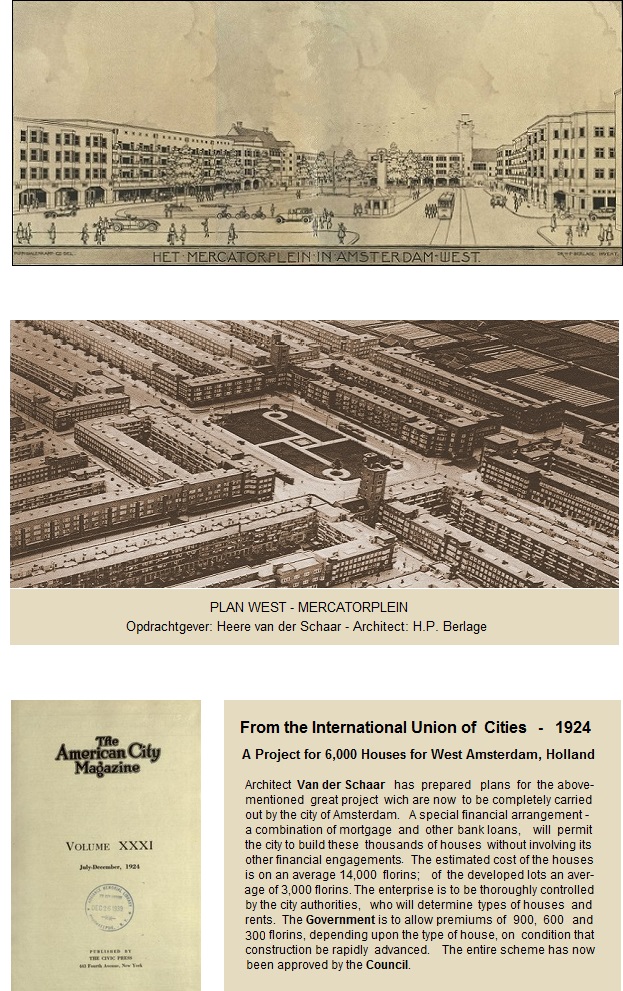 Up to the present, part of this real estate empire is still managed by Van der Schaar. Following generations have committed to maintain and expand - both national and international - the legacy of H. van der Schaar .

Indonesia-Investments intends to continue this expansion. 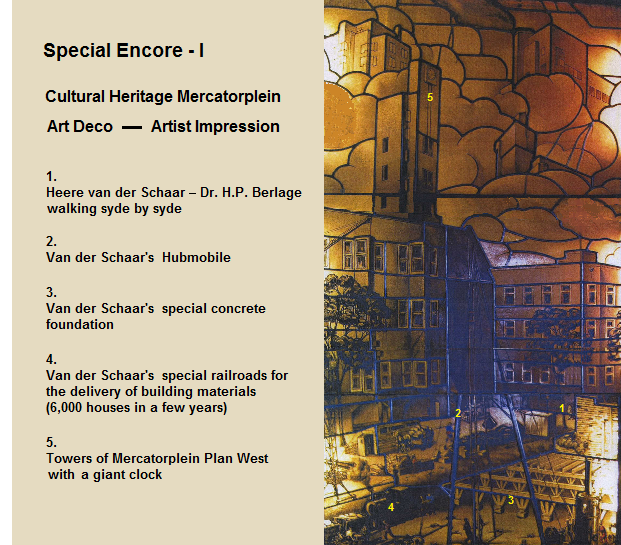 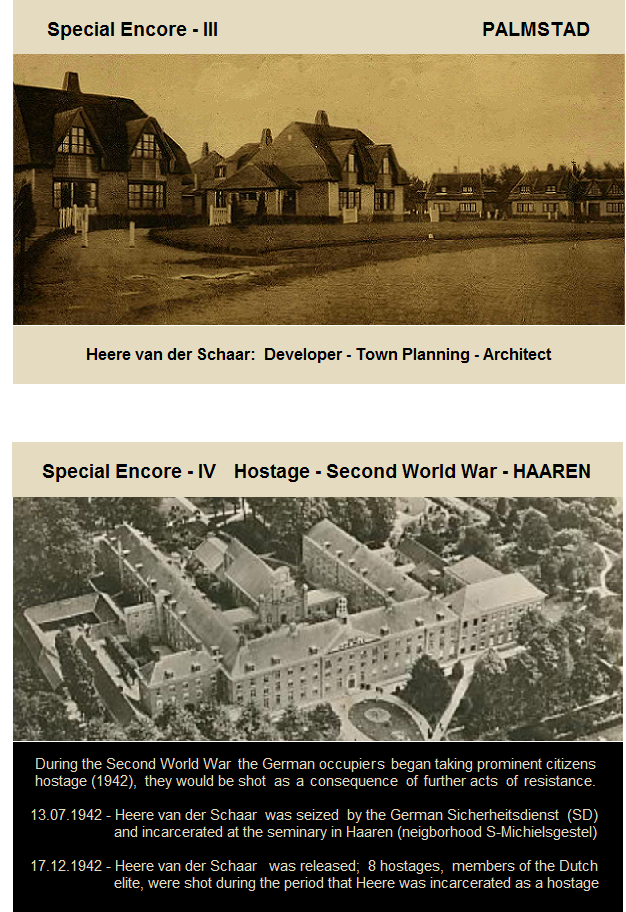 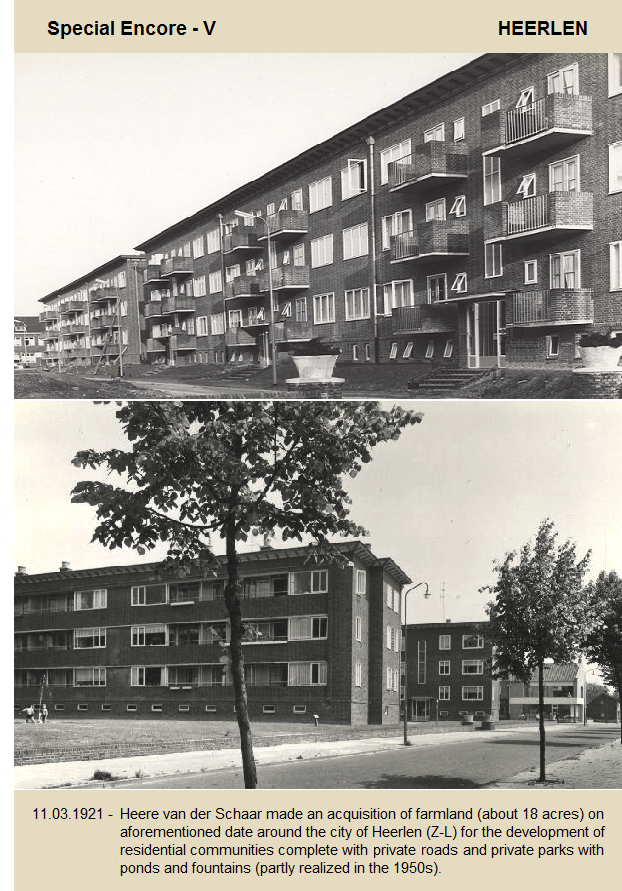 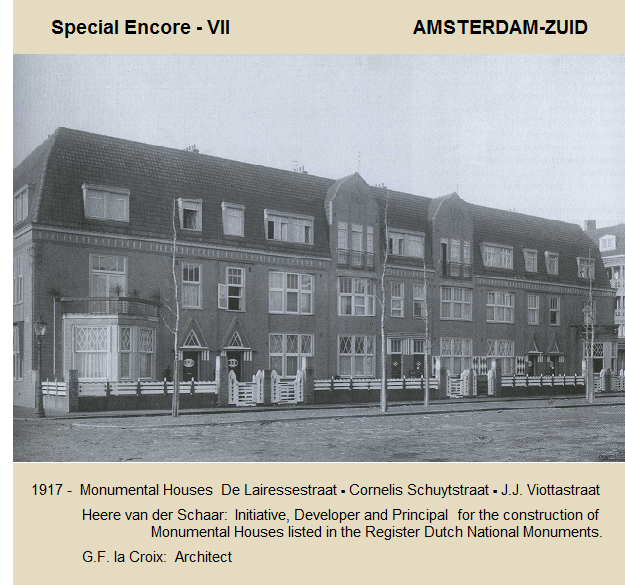 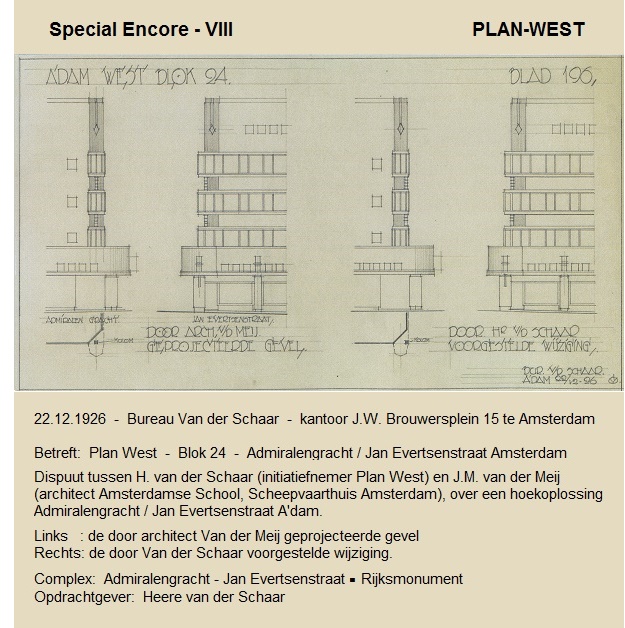 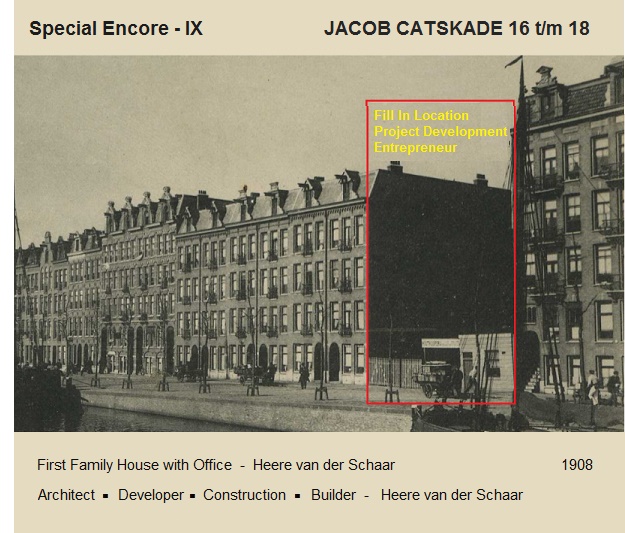 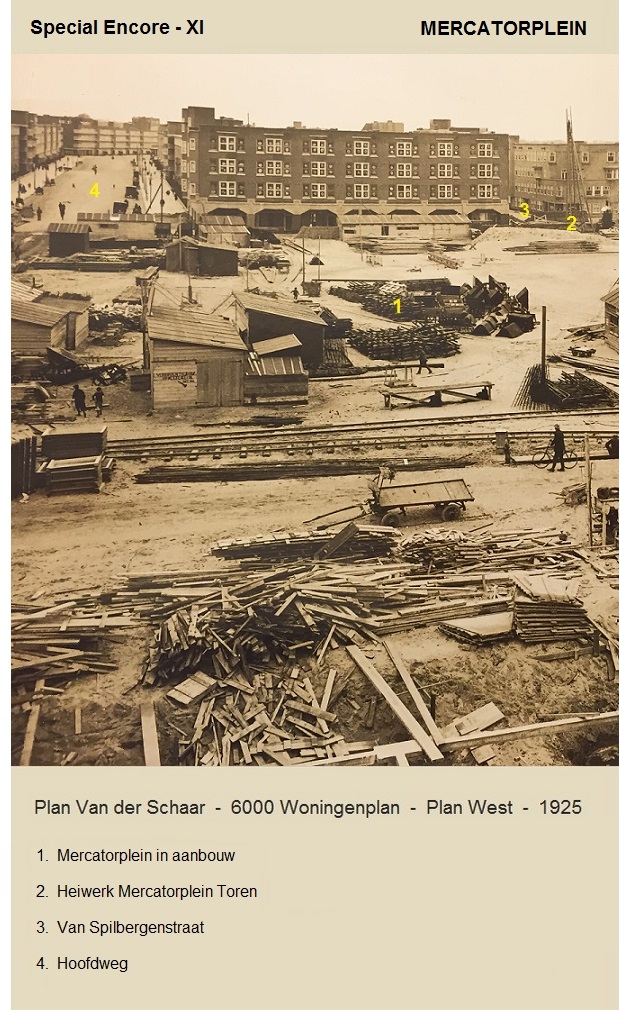 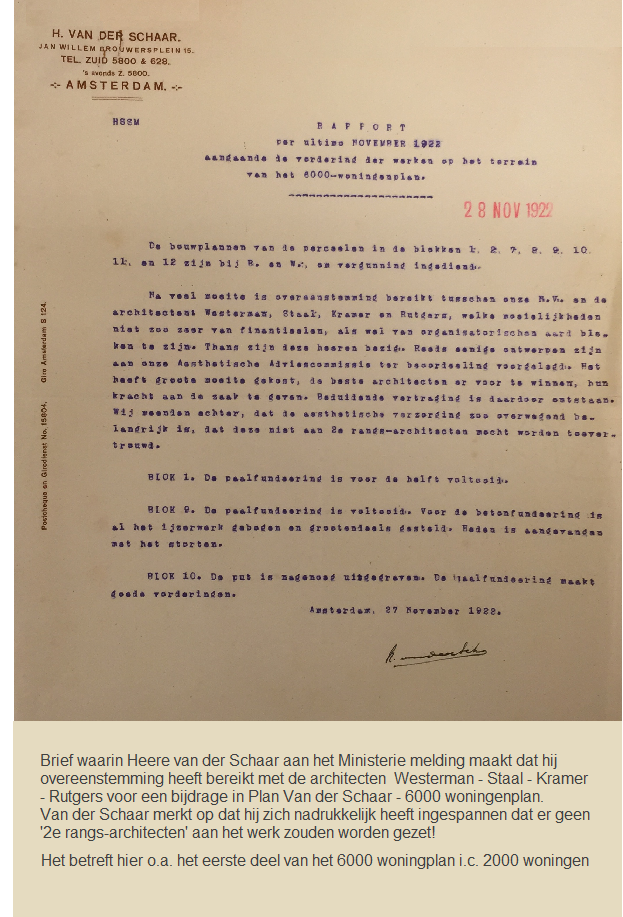 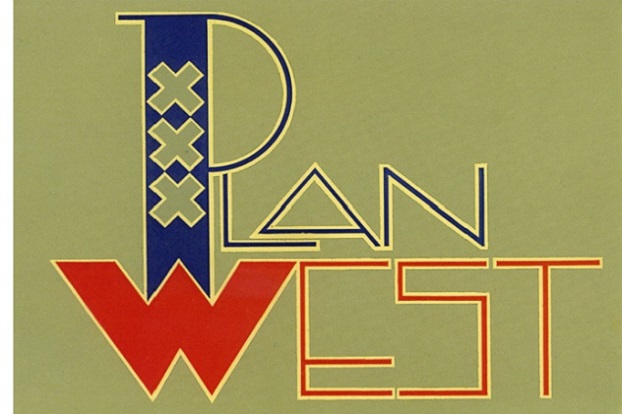 Heere van der Schaar and the Westward Expansion of Amsterdam

Heere van der Schaar (born 23 November 1882, died 10 November 1970) was a visionary (‘construct car parks below the canals’), construction entrepreneur, property developer, architect and structural engineer, as well as a formidable organizer. His major construction plan was the Van der Schaar Plan, which involved the construction, in the 1920s, of a city for approximately 30,000 inhabitants to the west of the then boundaries of Amsterdam, to be called ‘De Baarsjes’.

Following huge construction projects in boroughs such as de Staatsliedenbuurt, Transvaalbuurt, Museumkwartier and Rivierenbuurt, Van der Schaar believed in the 1920s that a westward expansion of Amsterdam, towards Sloten, had significant potential. At the time, there was a great shortage of affordable high-quality housing for the middle and working classes in the Dutch capital. This being the case, Van der Schaar developed his ‘Six Thousand Houses Plan’, also known as ‘Western Amsterdam Plan’ in later years. The idea was to erect 6,000 houses in five years or less, which was unprecedented at the time and required special methods from all industries involved in the project. Van der Schaar had previously purchased the land to the west of Amsterdam for the purpose of facilitating the city’s westward expansion, which put him in excellent stead to negotiate with the Amsterdam local authorities. Furthermore, Van der Schaar had obtained organizational experience as the Chairman of the Amstels Bouw Vereeniging [Amstel Housing Corporation], whose Southern Amsterdam Construction Plan, drawn up on Van der Schaar’s initiative, involved the construction of approximately two thousand houses in the Rijnstraat-and-Amstellaan area (1921).

Van der Schaar himself submitted the Western Amsterdam Plan, a.k.a. the Van der Schaar Plan, to the Amsterdam local authorities in January 1922. It received its definitive approval by the Amsterdam municipal government in September 1922. The approval included amendments to the then-applicable building regulations at Van der Schaar’s demand. The Western Amsterdam Plan related to the quadrant of streets formed by Postjesweg, Admiralengracht, Jan van Galenstraat, Hoofdweg, Orteliusstraat and Van Spilbergenstraat, whose beating heart was to be Mercatorplein Square, and whose major central axes (arterial roads and turbine square) were to be the Hoofdweg and Jan Evertsenstraat.

Relations with Parties Representing the Public and Private Sectors

The Amsterdam municipal government appointed a three-man team consisting of architects Gratama, Hulshof and De Meyer-Versteeg, who were tasked with supervising the quality of the houses to be erected, as well as the progress of the construction project. Due to the great demand for houses, the government had set strict requirements for the time span within which the project was to be completed: no more than five years. If construction were to exceed that time span, the project would not be eligible for a permanent government subsidy.

In a meeting held in December 1922, architects representing the Amsterdam School, including Wijdeveld, Kramer, Staal, Roodenburg, Westerman and Van der Meij, expressed their misgivings regarding the feasibility of the on-budget construction of 6,000 high-quality houses within the allotted time frame. On behalf of the Amsterdam municipal authorities, Gratama reassured those attending the meeting, which was not attended by Van der Schaar himself, telling them that Van der Schaar really was the only person capable of getting the Six Thousand Houses Plan off the ground. For its part, the government also expressed its confidence in the feasibility of the project.

Van der Schaar made certain that the best architects of the period (known collectively as the Amsterdam School) were hired to carry out his plans, as demonstrated by one of his letters to the Ministry, in which he comments that he had great difficulty arriving at an agreement with several architects (Westerman, Staal, Kramer and Rutgers) on the façades to be erected on the street sides. In this letters, Van der Schaar emphatically stated that no ‘second-rate architects’ would be hired to complete his plan.

Mercatorplein Square was designed by none other than Berlage, the famous architect who had previously designed the Amsterdam Commodities Exchange. It should be noted that Berlage’s Mercatorplein Square design had to satisfy several requirements stipulated by Van der Schaar, such as balconies on the square side of the buildings.

1926 Speech at the Municipal Council

The first pile was driven in July 1922, while the final pile was driven in September 1926. Later, in a poignant speech held at a meeting of the Amsterdam Council, Heere van der Schaar told the municipal authorities that he had kept every single one of the promises he had made at the start of the Six Thousand Houses Plan, and that he had completed the project within the time frame set by the government.

A few key figures and facts pertaining to the Van der Schaar Plan, a.k.a. the Six Thousand Houses Plan, a.k.a. Western Amsterdam Plan:

So how did Van der Schaar get this incredibly ambitious (for the time) construction project off the ground, and how did he manage to complete it in less than five years? Particularly since construction took place during a financial crisis and construction site strikes were common at the time:

At present, the area covered by the Western Amsterdam Plan is part of the Admiralenbuurt borough and looks set to be proclaimed a protected part of town (cultural heritage) soon. 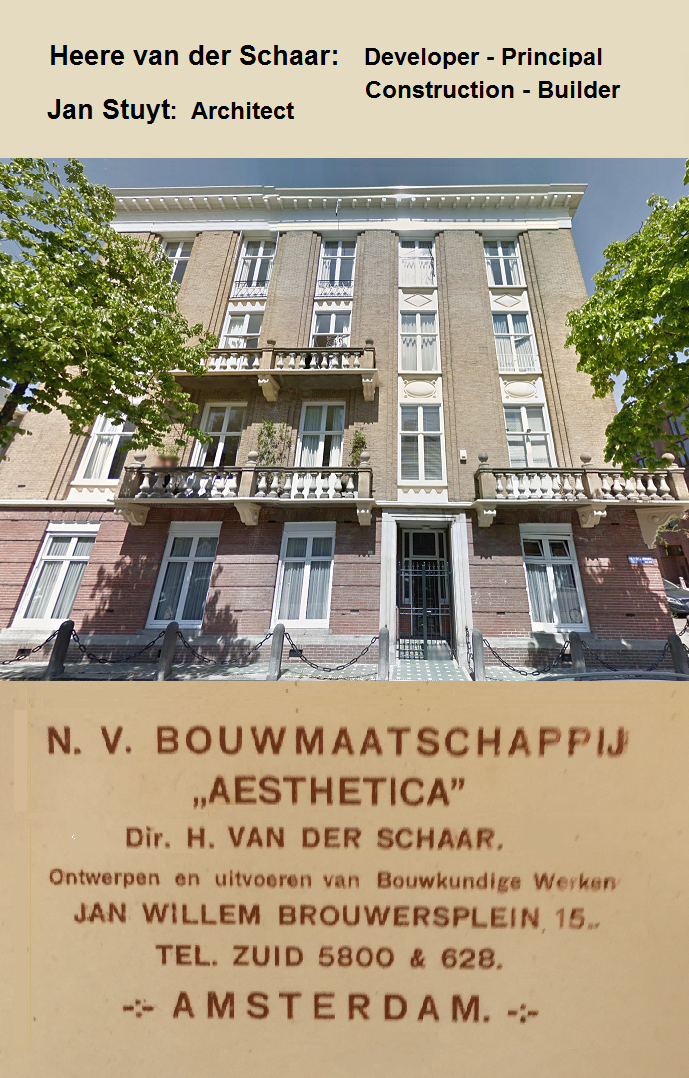 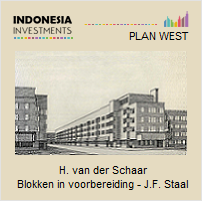 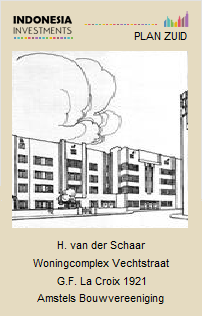 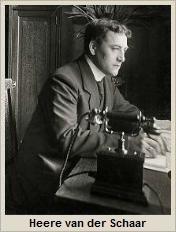 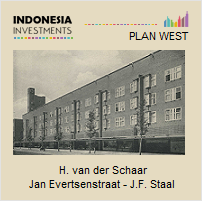 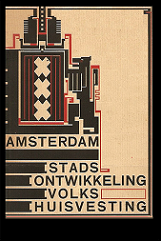 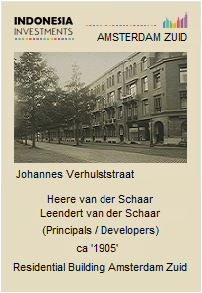 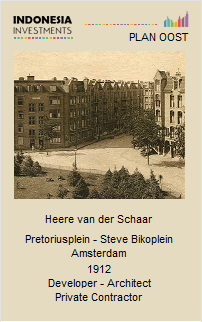 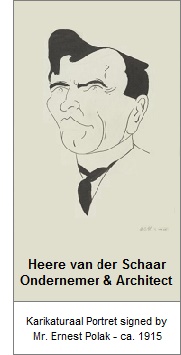 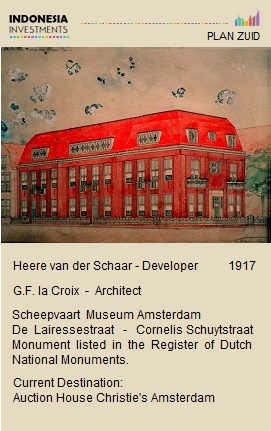 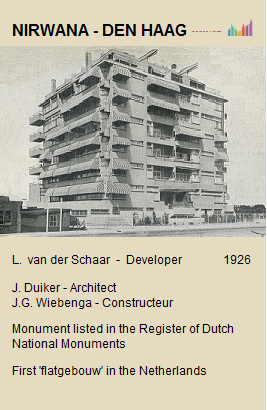 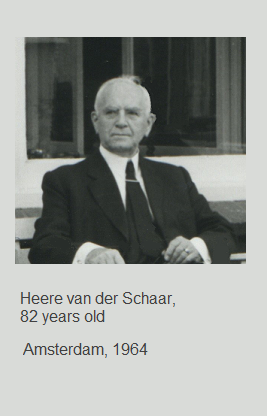