Despite having slowed in recent years, there is still ample room for growth in Indonesia’s property sector, particularly strata title apartments in the capital city of Jakarta (‘strata title’ refers to the multi-level apartment blocks and horizontal subdivisions with shared areas). In 2015, a total of 46 property projects are expected to finish, supplying 24,954 new apartment units (with a combined value of USD $1.25 billion) to Jakarta, an 18.98 percent increase from last year’s new apartments realization.

In fact, the number of new apartments in Jakarta in 2015 can reach nearly 29,000 units if several property projects - that are currently being carried out - fail to finish before the year-end. Although the supply of new apartments is high in Jakarta, there are no indications that a property bubble is emerging as most apartments (approximately 70 percent) are purchased by end-users rather than speculative buyers. Ferry Salanto, Associate Research Director at Colliers International Indonesia, added that apartment sales in Jakarta have recovered after the presidential election (July 2014) as more and more Indonesians prefer to live in ‘vertical property’ in the central areas of Jakarta (close to their offices to avoid time-consuming traveling amid Jakarta’s heavy traffic congestion). Furthermore, due to limited available space in Jakarta (giving rise to rapidly increasing land prices) property developers focus on ‘vertical property’ (apartments, office towers and malls) to make efficient use of limited space.

As an illustration of robust demand, Joe Christian (Chief Marketing Officer of St Moritz Penthouse and Residences) said that 85 percent of the New Presidential Suite Tower (part of the St Moritz block) in West Jakarta has already been sold. This tower, which involves 159 units, is one of the projects that should be ready in 2015. This high-class apartment project is attractive for both end-users as well as investors as prices rise rapidly.

Rudy Margono, President Director of the Gapura Indah Group, said that in 2012 the price of a middle-income apartment was around IDR 250 million (USD $21,000). Two years later, the same apartment unit costs at least IDR 400 million (USD $33,000) amid strong demand, higher land prices and the higher price of building materials. Margono added that if the Indonesian government will raise prices of subsidized fuels this November, then apartment prices will rise accordingly. 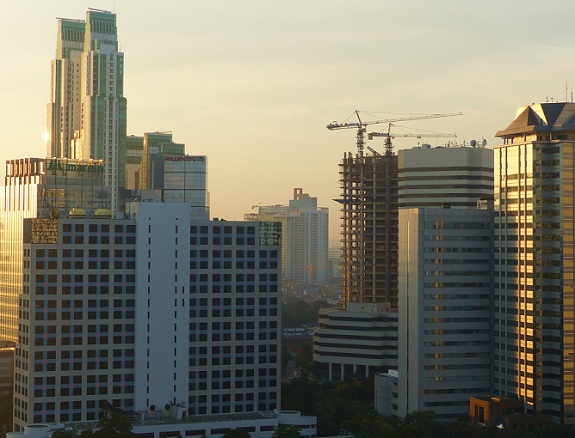 According to data from Colliers International Indonesia, prices of apartments will rise 17 percent in 2014, slightly below the price growth recorded one year earlier (20 percent).

Growth in Indonesia’s property sector has slowed in recent years as Bank Indonesia implemented tougher minimum down payment rules (regarding loan-to-value ratios for mortgages) as it detected speculative buying in the property sector (which might have led to a property bubble). The institution also raised its key interest rate (BI rate) in 2013 amid global and domestic concerns, thus making it more expensive for consumers to borrow money.

• Although having slowed in recent years due to a tougher monetary policy, Indonesia’s property sector (particularly apartments in Jakarta) is still booming