The novel coronavirus (COVID-19) outbreak has caused something extraordinary in Indonesia, and in the world; something we had not seen – in the case of Indonesia –since the Asian Financial Crisis in the late 1990s, namely: a sudden and dramatic drop in household consumption and business activity. Due to government policies, designed to prevent the spread of COVID-19 in the country and thereby safeguarding people’s health, the movement of people is heavily restricted, while companies in a wide range of sectors have had to close their doors (until further notice).

Several months ago, when the tariff war between the United States and China was still dominating the news, we noted that Indonesia is in fact relatively safe from such global turmoil as Indonesia is not highly integrated into international supply chains. Having a massive consumer force at home – namely 270 million Indonesians – it is domestic consumption (household consumption) that typically keeps Indonesia’s economic growth at a steady and robust rate, whatever the external turmoil may be (and what is not less important is that Indonesia has experienced rapid per capita GDP growth over the past 20 years, particularly thanks to the 2000s commodities boom, and thus the country contains a very strong consumer force).

What is so remarkable about the COVID-19 crisis (contrary to, for example, the US-China tariff war or the financial crisis in the late 2000s) is that the ongoing COVID-19 crisis has led to a sudden and drastic decline in household consumption. This is something very unusual, indeed. The last time something similar had happened was during the Asian Financial Crisis (in 1998 Indonesia’s GDP in fact contracted minus 13 percent y/y).

Few people now visit shopping malls (shopping malls being an important element of urban culture in Indonesia), while many restaurants and shops have temporarily closed their doors. Tourism has come to a (near) complete standstill, and thus many hotels and other tourism-related businesses (such as travel agents or those engaged in transport services) have stopped operations. And the list can go on and on.

The point is that household consumption has been affected heavily, either directly (because people stay at home instead of consuming products and services outside, while postponing any big decisions, such as buying a car or a house) or indirectly (as part of the people see a drop in income and therefore simply cannot spend as much as they did in the recent past).

Considering household consumption accounts for approximately 57 percent of total economic growth in Indonesia, it is quite worrying to think what the impact of the big decline in household consumption will be on gross domestic product (GDP). And what’s more, direct investment realization is bound to crash in the second and third quarters of 2020. Thus, all hope is on government stimuli to avoid a deep and long recession.

Read the full article in our April 2020 update. To purchase the report, please send an email to info@indonesia-investments.com or a WA text message to +62(0)8788.410.6944 for further information. 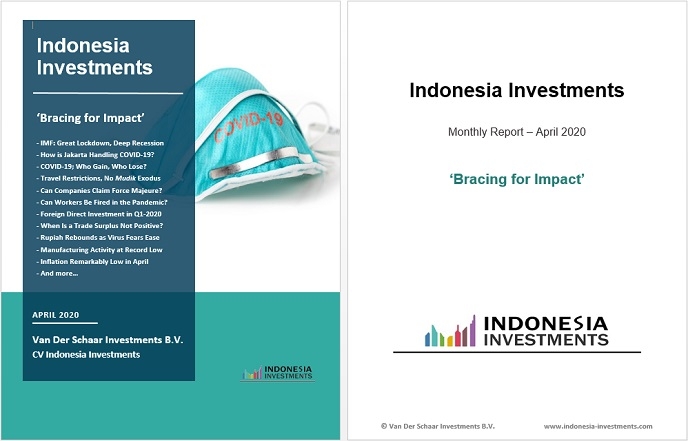