Jasa Marga's core business is to plan, build, operate and maintain toll roads in Indonesia. Up to the end of 2013, the company has 22 toll road concessions - with a total length of 545 kilometer - in operation and 193 kilometer of toll road that is expected to become operational between 2013 and 2016. Thus, at end 2016, Jasa Marga is expected to operate toll roads with a combined length of 738 kilometer, which implies a 35 percent increase in toll road length compared to late 2013.

Most of Jasa Marga's toll roads are situated in - or around - the Greater Jakarta area in West Java, Indonesia's most densely populated area. The company also operates toll roads in East Java, Central Java, North Sumatra and Bali. 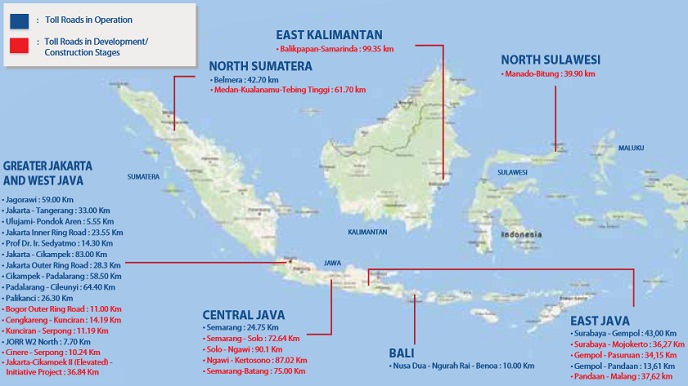 Apart from adding toll roads length through tenders, Jasa Marga also obtains toll road concessions through acquisition as well as through unsolicited method. It may acquire new (potential) toll roads whose concession holders face obstacles in development of the project, in particular those located in major cities that have high economic value and are connected to the company's existing toll roads.