PT Mitra Keluarga Karyasehat Tbk is an Indonesia-based private hospital operator. It is engaged in hospital management and business services in the Greater Jakarta area, Surabaya and Tegal. Per 2015, the company owns 12 hospitals with an inpatient bed capacity of more than 1900 beds.

Mitra Keluarga Karyasehat is one of Indonesia's leading healthcare providers in the Greater Jakarta area, Surabaya (East Java) and Tegal (Central Java) with a solid operational and financial track record. It owns eight hospitals in the Greater Jakarta area, three in Surabaya and one in Tegal, all accredited by the Indonesian Commission on Accreditation of Hospitals (KARS). Seven of the hospitals are categorized as class B, the highest class Indonesian private hospitals can attain.

In March 2015 the company was listed on the Indonesia Stock Exchange. Mitra Keluarga Karyasehat stated that - starting from 2015 - it intends to pay dividends to shareholders at a rate of at least 25 percent of its consolidated net income (subjected to the company's cash flow and investment plans).

• Good track record and long experience in hospital management
• Sufficient cash reserves to expand business operations
• The hospital sector has a high barrier for new entries
• The government is committed to make healthcare services accessible for the population
• Indonesia's expanding middle class is increasingly aware of the advantages of healthcare services (and has the financial resources to use these services)
• Healthcare spent per capita is still low, hence ample room for growth

Indonesia contains nearly 2,400 hospitals (a bed capacity of over 290,000), with approximately 67 percent being government-owned and non-profit organization hospitals. In terms of geographical location, most of Indonesia's hospitals are located on Java, Indonesia's most populous island. 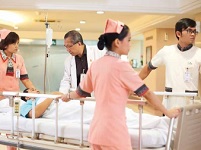 In the last few years, private hospital operators have been the driving force behind expansion of Indonesia's hospital industry. However, the country's bed-to-patient ratio (0.9) is still among the lowest in the ASEAN region in 2014 (in Malaysia and Thailand this ratio is 1.9 and 2.1, respectively, while the global average is 2.5). Similarly, Indonesia's doctor-to-patient ratio per 1,000 people is also among the lowest in the region at 0.3.

The aforementioned basically indicates that the current state of Indonesia's healthcare services is inadequate, particularly given that demand is expected to grow strongly in the future due to the nation's economic growth, the rapidly expanding middle class and urbanization.