Abdul Muis (in old Indonesian spelling Abdoel Moeis), 1886-1959, was an Indonesian novelist, journalist and advocator of Indonesian independence from the Netherlands. As a novelist, Muis is most remembered for being the author of Salah Asuhan (Wrong Upbringing), a novel that is regarded as one of the great pieces of early modern Indonesian literature. As a journalist and freedom fighter, he is remembered for his blunt criticism toward the colonization of Indonesia. As a result he was arrested and spent several years in exile.

Born in West Sumatra in 1886, Muis left his native region to study medicines at STOVIA in Batavia (present-day Jakarta). However, due to ill health Muis had to quit his study after three years without obtaining his diploma.

After spending several years as a civil servant at the Department of Education and Religion, Muis moved to Bandung (West Java) to start working as a journalist at the Preanger Bode, a daily newspaper. Reportedly, he read several articles in this newspaper, written by Dutch colonizers, which contained insulting language toward the native Indonesian people. Due to the injustice felt while reading these articles, Muis decided to take revenge by also using his pen to criticize the Dutch colonizers. However, his supervisor at the Preanger Bode did not approve his writings and therefore Muis started sending his articles to De Express, a Dutch-language daily newspaper which was headed by Eduard Douwes Dekker, also a political activist and would become a national hero of Indonesia.

Due to his nationalist stance, Muis had to leave the Preanger Bode and became head editor at the Kaum Muda, a daily newspaper run by the first nationalist group that used the newspaper to spread anti-colonial views. 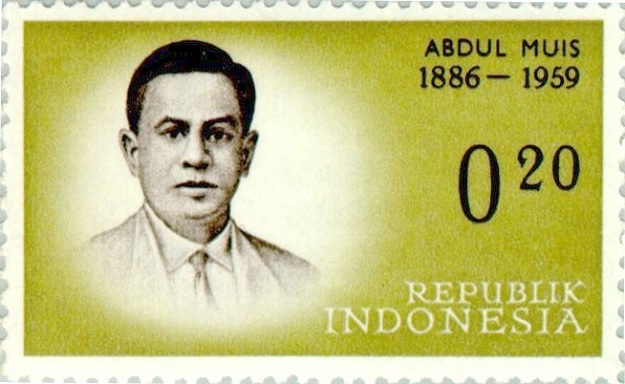 Around the same time Muis became involved in the Sarekat Islam alongside other key nationalist figures such as Suwardi Suryaningrat, Cipto Mangunkusumo, Wignyadisastra, and Douwes Dekker. This movement started as a batik traders cooperative but would evolve into the first nationalist political party in the Dutch Indies and which promoted Islamic modernism. Muis quickly rose through the ranks of the Sarekat Islam and became the movement’s representative to the Netherlands in negotiations aimed at obtaining direct representation for Indonesia in the Dutch parliamentary system.

However, between the years 1919 to 1922, Muis ran into trouble on a number of occasions. In 1919 he was arrested after delivering a speech in North Sulawesi. Through this speech he, allegedly, incited the local people (to reject forced labour) which led to the murder of a local Dutch supervisor.

Later, in 1922, Muis was arrested for leading a strike in Yogyakarta. After his arrest he went back to his native region in West Sumatra and advised local native leaders to stop collecting taxes from the local Minangkabau people. This undermining of Dutch authorities led to his exile in the city of Garut (West Java) for three years. During his period in Garut, Muis wrote his first - and most famous - novel Salah Asuhan.

After the exile, Muis started to focus on literature as the colonial authorities were closely monitoring his political activities. He started communicating with Balai Pustaka, a Dutch state-run publishing house founded in 1917, in order to get his novel Salah Asuhan on the market. The novel is among the greatest examples of early modern Indonesian literature and depicts the issue of racial and social discrimination in West Sumatra under the colonial regime (in 2010 this novel was translated into English under the title Never the Twain).

After independence in 1945, Muis was one of the founders of the Persatuan Perjuangan Priangan which focused on the development of West Java, and he was involved in the establishment of the Bandung Institute of Technology.

Abdul Muis died in Bandung in 1959. In the same year he was recognized as a national hero by President Sukarno.