Moch. Hadi Santoso, Director of BRISyariah, stated that "we are pleased to be one step closer to becoming a public company in Indonesia. Soon the Indonesian people will be able to own shares of BRISyariah. Through this IPO - in addition to raising fresh funds to strengthen the company's capital - we will also acquire the status of public company, meaning that we will need to enhance the practice of good corporate governance (GCG) and improve risk management in order to bring blessings and safeguard the trust of the community and the company's stakeholders."

The public offering period takes place between 2-4 May 2018 at the sports field of the BRI Tower in Sudirman, Jakarta. BRISyariah is set to become the first listed sharia bank that is owned by a state-controlled entity. Parent company Bank Rakyat Indonesia, one of the leading banks in Indonesia, is for nearly 57 percent controlled by the Indonesian government.

Hadi Santoso added that BRISyariah's IPO aims to contribute to the nation's economy by boosting the Islamic banking industry. One key focus of BRISyariah is to boost sharia financing in Indonesia, both for investment purposes and consumption.

Around 80 percent of the IPO proceeds will be used by BRISyariah to increase funds for credit disbursement. Furthermore, about 12.5 percent will be used for the development of an information technology system. Meanwhile, the remaining 7.5 percent will be used for branch network development from Sabang (Sumatra) to Merauke (Papua). "We want to become a game changer for the domestic sharia banking industry through the acceleration of sharia business expansion, especially by increasing financing," Hadi Santoso said. 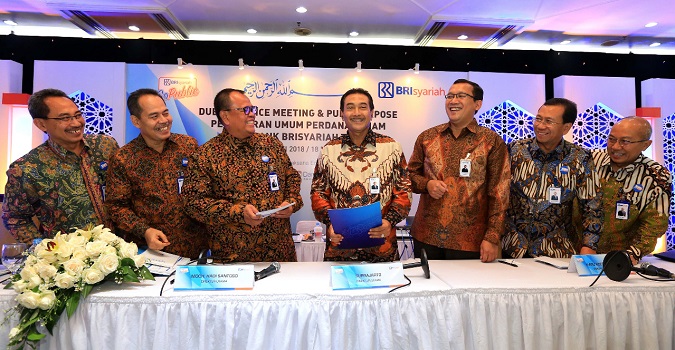 BRISyariah is regarded having ample scope to expand its business on the back of the rapidly growing banking sector of Indonesia as well as the nation's sharia industry. In addition to being the manager of Haj funds, and other Islamic finance matters such as zakat, waqf, infaq and alms, the company also provide financing facilities to the community. Recent OJK data shows that in terms of assets sharia banking contributes only 5.74 percent to the total national banking industry (data from December 2017), which implies that there is ample room for growth for the Islamic banking industry.

Hadi Santoso also explained that the strengthening of capital (through the IPO) is a strategic step for BRISyariah in achieving its ambition to become a leading Islamic bank and become the largest modern retail bank in Indonesia. "To achieve our ambitions, we start with the strengthening of our core capital. With our IPO and the corporate profit that will stem from fiscal year 2018, our capital strength will put BRISyariah into a BUKU III category bank (referring to banks that have a core capital between IDR 5 trillion - IDR 30 trillion) that will facilitate the development of products and networks. With the stock price we set, we are optimistic that this IPO will appeal to investors, who can enjoy the added value of their investment in BRISyariah shares," Hadi Santoso added.

BRISyariah has already released its Q1-2018 financial report, showing a net profit of IDR 54.38 billion, up 64 percent from profit in the same quarter one year earlier. Great growth came on the back of rising operating income.