Excise duties are relevant sources of revenue for the government. By making specific products more expensive an excise duty aims to discourage or limit the consumption of products that are considered harmful to the health of consumers or disruptive to the environment. Examples of often targeted products are tobacco, alcohol and fuels.

However, the government generates few excise duty revenues from other products. For example, considering Indonesia is a religious country with a big Muslim majority population, activities such as gambling and the consumption of alcoholic beverages

are very limited or even completely illegal (such as online gambling). And therefore, the tobacco excise is basically the only source of significant state revenues in terms of excise duties. For comparison, total excise revenues in full-year 2021 reached IDR 195.5 trillion (approx. USD $13.1 billion). And so, considering tobacco contributed IDR 188.8 trillion to last year’s total, the tobacco excise duty accounts for almost 97 percent of Indonesia’s total excise revenue. Are there missed opportunities?

If we take a look at the international situation, then we see that – typically – excise duties cover alcohol, tobacco, and energy products. But because alcohol does not have great potential in Indonesia (with the exception of alcohol consumption in the tourism industry) and the energy sector actually receives quite some state subsidies (for electricity and fuel) to keep prices low (implying many car and motorcycle users can enjoy subsidized fuels), Indonesia remains dependent on the tobacco excise.

However, because governments are always looking for more revenue to finance the social and economic developments plans, governments may be more than willing to revise existing excise duty structures. In the case of Indonesia we certainly have seen several plans to revise the excise duty structure over the past couple of years. And it is certainly a worthwhile effort because total government revenues from the excise duties account for slightly over 10 percent of total government revenues. Moreover, excise duty revenue growth shows a stable growth rate of nearly ten percent, per year. Part of the ‘secret’ is that it is relatively easy to monitor and calculate flows of excise duties (compared to income tax).

The table below shows that in the first five months of 2022 there has been a strong rebound in excise duty revenues in Indonesia. Total excise duty revenues reached IDR 105.53 trillion (approx. USD $7.3 billion) per 31 May 2022, up 41.1 percent from the same period one year earlier. One may notice that it particularly is the tobacco component that supports growth (partly supported by the Indonesian government’s decision to raise its tobacco excise across cigarette types by an average of 12 percent per 1 January 2022).

[1] According to the WHO, Indonesia was home to 60.8 million adult male smokers and 3.7 million adult female smokers in 2020 (hence a total of 64.5 million). This is a decline from an estimated 95 million Indonesian smokers in 2015. Considering the number of active cigarette factories and the number of cigarettes produced has been falling over the past decade (partly the consequence of higher excises taxes, other public anti-smoking campaigns, and people’s improving awareness of health), we often refer to Indonesia’s cigarette industry as a ‘sunset industry’.

This is the introduction of the article. To read the full analysis, you need to purchase the July 2022 edition of our monthly report. For further information you can contact us by sending an email to info@indonesia-investments.com or a text message to +62.882.9875.1125 (including WhatsApp). 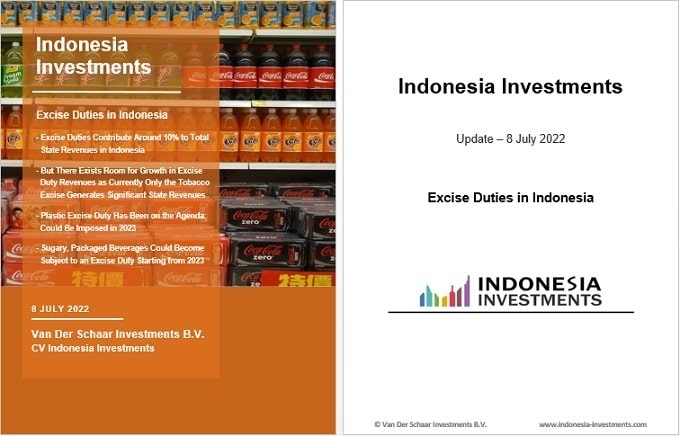