The move was expected as the Federal Reserve continues to aggressively tighten its monetary policy in an attempt to combat high US inflation, thereby causing big capital outflows from emerging markets, including Indonesia (as US assets become more attractive).

Bank Indonesia’s benchmark 7-day reverse repo rate was raised by 0.50 percent to 5.25 percent in November 2022, while the deposit facility and lending facility rates were raised (also by 50 bps) to 4.50 percent and 6.00 percent, respectively.

The decision to raise its interest rates was explained by Bank Indonesia as “a front-loaded, pre-emptive and forward-looking measure to lower inflation expectations, which are currently overshooting (and return core inflation to the annualized 2.0 – 4.0 percent target range in the 1st half of 2023), while simultaneously strengthening exchange rate stabilization in line with the rupiah's fundamental value in response to US dollar strength and elevated global financial market uncertainty amid strong and growing domestic economic demand”.​

Subscribers will recognize that this is essentially the same text as last month when Bank Indonesia also raised its key rate by 50 bps (from 4.25 to 4.75 percent).

The chart below shows that Bank Indonesia is following the example that is set by the US Federal Reserve. Initially, it in fact took quite a long time for Bank Indonesia to respond to its US counterpart (arguing that the low benchmark rate in Indonesia facilitated the rebound in economic activity in the aftermath of the COVID-19 crisis). However, as pressures on the rupiah became particularly strong, it has now joined the global tightening wave. The latest rate hike was Bank Indonesia’s fourth-straight interest rate hike (in as many months), and its third-straight 0.50 percent interest rate hike. By keeping a (wide) spread with US interest rates, Bank Indonesia tries to limit capital outflows from the country.

This is part of the introduction of the article. Read the full article in our November 2022 report. This report (an electronic report) can be ordered by sending an email to info@indonesia-investments.com or a message to +62.882.9875.1125 (including WhatsApp). 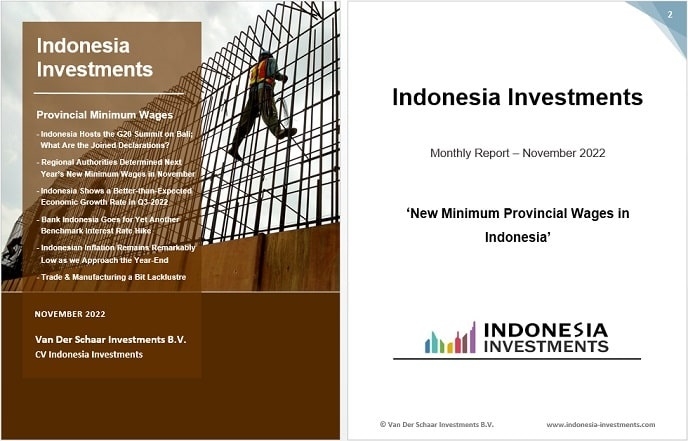