Based on the latest data released by Statistics Indonesia (in Indonesian: Badan Pusat Statistik, or BPS) on 18 April 2022, Indonesia’s export and import performance both touched new all-time record high levels in March 2022.

In this article we are going to take a look at the factors that explain this performance while also taking another look at the disrupted trade flows between Indonesia and Ukraine/Russia.

Indonesia enjoyed a USD $4.53 billion trade surplus in March 2022. By Indonesian standards this is a great performance (and positive for the country’s current account balance, foreign exchange reserves, and rupiah). As usual, Southeast Asia’s largest economy saw a deficit in the oil and gas balance (of USD $2.09 billion). However, this deficit was fortunately more than compensated by the surplus in the non-oil and gas balance (USD $6.62 billion). 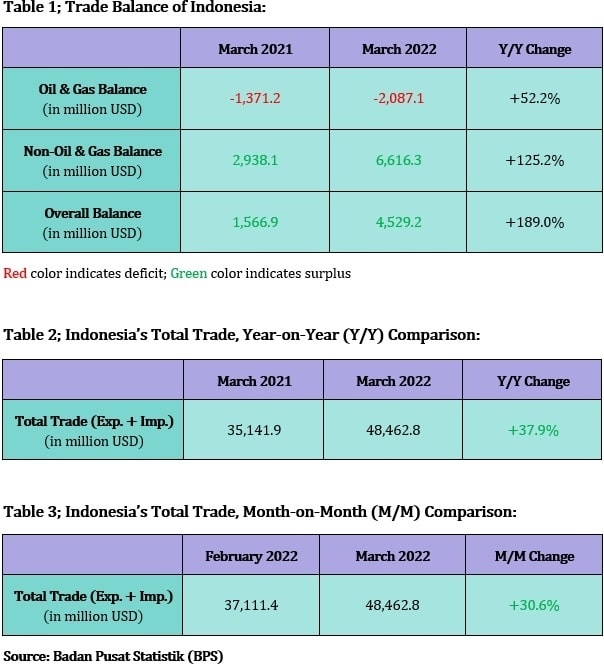 The three tables above show that Indonesia’s trade balance has grown stronger in March 2022 compared to one month and one year earlier. Compared to one year ago (when the world was in an earlier recovery phase from the COVID-19 crisis), global economic activity had increased significantly by March 2022 (reflected in the huge jump in commodity prices). What’s therefore more marked is the impressive growth in the March 2022 trade surplus compared to the preceding month. The sharp jump in coal and palm oil exports – which seem to have recovered after experiencing some export restrictions earlier in 2022 – is particularly noteworthy (which is discussed in more detail below).

Meanwhile, we continue to underline that – in terms of the oil and gas balance – Indonesia has to cope with a structural deficit, particularly because Indonesia has been a net importer of oil since 2004 (after years of falling domestic oil production, while domestic oil consumption soared structurally amid robust economic growth).

Considering Indonesia needs to import more oil when domestic economic activity increases, while global demand for oil has been growing amid the economic recovery (in combination with concern over adequate supply, including the Russo-Ukrainian war), global crude oil prices have skyrocketed and Indonesia’s oil and gas deficit has become significantly worse than it was one year ago. And unfortunately, this forms a situation that cannot change in the foreseeable future as Indonesia’s demand for crude oil simply remains rising while domestic production remains sliding. As such, the country’s structural oil and gas might actually widen in the period ahead.

Over the past two decades, Indonesia has tried to limit the oil and gas deficit in a number of ways (such as trying to create a more conducive investment environment in the oil and gas industry, the biodiesel program, and by limiting distribution and sales of gasoline). However, the oil and gas deficit continues to widen. Therefore, the energy transition (in which countries move away from fossil fuels, including oil, and move toward clean energy sources that generate energy domestically) should be the real problem-solver. This includes the electric vehicle that hopefully becomes more affordable (and user-friendly by having more charging stations available in society).

This is the introduction of the article. Read the full article in our April 2022 report. Order the report by sending an email to info@indonesia-investments.com or a message to +62.882.9875.1125 (including WhatsApp).

Price of this (electronic) article: 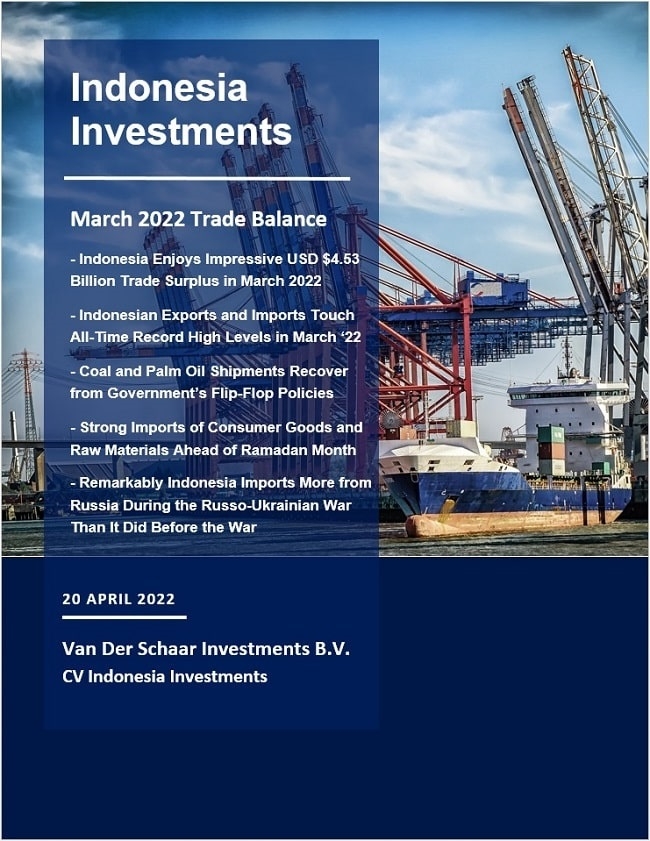