As stock markets continue to trade near precarious highs and an underlying current of geopolitical uncertainty continues to limit the outlook for equities in 2019, it is not entirely surprising to see going prices rallying. Indeed, this has been our price forecast for several weeks. But the confirmation of these forecasts came as the result of new evidence indicating weakness in US labor markets and rising expectations that the Federal Reserve will be forced to reduce interest rates more than previously anticipated.

The most recent economic report from ADP (private payroll processor) showed that 27,000 people were hired during the month of May. This is the weakest private employment figure since March of 2010 and it now places the long-term bullish trend argument back into question. If the Fed begins cutting interest rates due to recession fears, it creates a perfect recipe for gains in the precious metals complex. Gold prices are now moving to their highest levels in 3.5 months, and the August futures prices have already made an initial attack on the important $1,349 level.

Furthermore, the disappointing ADP report may generate further downside in the US dollar, as it suggests a major reversal in the gains which have been made in non-farm payrolls. These factors (along with the alarming undercurrents of debt in the U.S.) have been the primary factors supporting our forecasts calling for surging gold prices. If the economic data continue to disappoint, investors should expect continued rallies in the precious metals which far surpass current YTD performances.

Comex Gold for August delivery has clearly broken $1,330 per ounce, which was our critical price zone for continued gains. Valuations in the most active contracts have not made these types of moves since February 20th. Buying activity has even become apparent amongst official names, as central bank gold purchases have reached the highest levels in five decades and this could create additional bull catalysts going forward.

We may see a potential wildcard in stock markets, however, as the prospect of lower interest rates can also have the effect of raising equities valuations. US benchmark stock indexes have traveled in the upward direction mid-week, potentially detracting from some of the market’s demand for gold. Even with these headwinds, gold has now produced its sixth consecutive gain (which is the best winning streak we have had since the 11-day bull rally that completed in early January of 2018).

In all of the headlines centered on gold, savvy investors will be looking for new opportunities developing in the major gold miners. Newmont Goldcorp Corp. (NYSE: NEM) is trading at a possible inflection point after bouncing from monthly support levels under $30 per share. Readings in the MACD histogram are slightly negative (but just barely), so this could change without much difficulty if the bull trend in the underlying gold price continues. Next resistance comes in at $37.63, followed by $41.98 per share. 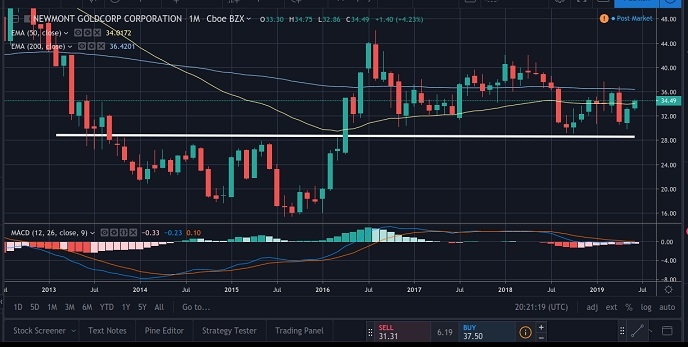 Another name in the gold mining sector that investors should be watching is Barrick Gold Corp. (NYSE: GOLD), which is a stock that actually makes up a substantial portion of the VanEck Vectors Gold Miners ETF (NYSEARCA: GDX), at 10.03% of the fund. From a fundamental perspective, Barrick is actually well-positioned in terms of its debt levels and so this is one stock that has the potential to outperform within the sector.

From a chart perspective, investors might consider waiting for an upside break of resistance at $13.85 before committing to long positions. This is a key area on the weekly charts, and a break of this supply zone should take pressure off the downside.

Support levels have moved up to $11.50, so this would also represent an acceptable buy zone if markets are able to fall to these levels. The 200-week exponential moving average is rapidly descending, so it will not take much for markets to make a clear break of this technical indicator. In the event this occurs, it would be another bullish factor in favor of long positions in shares of GOLD. 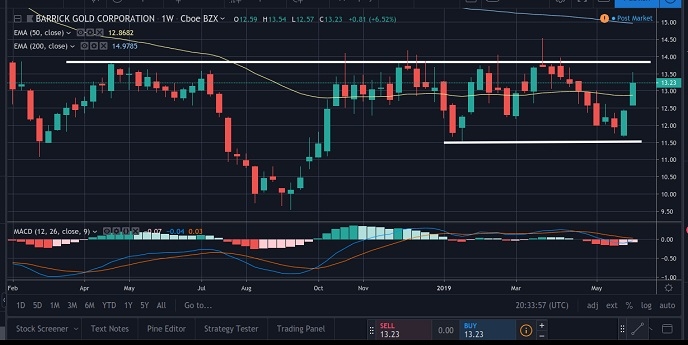 That said, buying-on-the-dip strategies may not work in the current market context, given the strong level of momentum that is supporting precious metals assets. Bullish trends in gold and silver will continue to be supported by trade tensions between China and the US. As a result, further weakness in global economic data or new comments from Federal Reserve Chairman Jerome Powell which indicate substantial reductions in interest rates can only add more fuel to this fire.