Some concern has been raised about the inflow of foreign 'hot money' into Indonesia amid accomodative monetary policies conducted by central banks of the Eurozone and Japan (the latter implemented negative interest rates in late-January). The world's carry traders are now seeking cheap funds in advanced economies and invest these funds in assets that have attractive returns such as Indonesian bonds and stocks. Indonesia's benchmark interest rate (BI rate) is still relatively high at 7.0 percent after a 25 basis points cut at Bank Indonesia's February 2016 policy meeting.

Between the start of the year and 17 February 2016 foreign investors added IDR 32.55 trillion (approx. USD $2.4 billion) to their holdings of tradable government bonds (Surat Berharga Negara, or SBN) as local yields are attractive. For example, the yield on the 10-year rupiah-denominated FR0056 - issued in the first week of 2016 - has reached 8.02 percent. This (government) bond issuance was heavily oversubscribed (raising a total of IDR 4.65 trillion).

Besides the bond market, so-called hot money also flows to Indonesia's stock market, particularly after the Indonesian government announced that the official Q4-2015 GDP growth figure was 5.04 percent (y/y), an encouraging result as it seems to point to an accelerating overall economy. So far this year foreign investors recorded a net buy on the Indonesia Stock Exchange worth IDR 1.83 trillion (approx. USD $136 million). This is still a modest figure but it is expected to rise amid an improving Indonesian economy and negative interest rates in the Eurozone and Japan (a monetary policy that could be in place for several years). Indonesia's benchmark Jakarta Composite has been one of the best performing stock indices in the world so far in 2016. 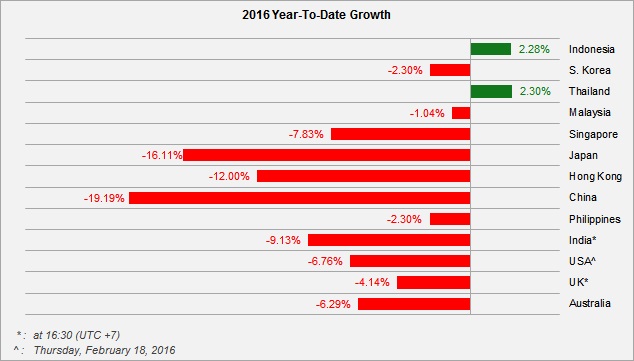 Inflows of foreign capital is also a key factor that has resulted in the strengthening rupiah rate. So far this year Indonesia's rupiah has appreciated 2.4 percent against the US dollar, thus being one of the best performing emerging market currencies in Asia.

Obviously, hot money is highly volatile (especially in the stock market) and these funds can rapidly exit the country when, for example, the US Federal Reserve announces another interest rate hike (this could occur in the second half of 2016). However, there is also concern that the inflow of hot money into Indonesia's bond and stock markets in the first seven weeks of 2016 has been excessive (valuations are increasingly out of tune with the underlying fundamental values) and therefore this could trigger a correction on the short term (perhaps in the second quarter of the year). However, after this adjustment, markets will have room to expand further provided the central banks of Europe and Japan continue their accomodative monetary policies.