The year 2017 already finished for equity investors and therefore we can take a look back at the performance of Indonesia's benchmark Jakarta Composite Index over the past 12 months. Indonesian stocks, generally, had a good year, with the benchmark index rising 19.99 percent to close 2017 at 6,355.65 points, a new all-time record high.

Meanwhile, three of the four major US stock indexes posted their best gains since 2013. The Nasdaq composite was the biggest winner climbing 28.2 percent this year on the back of large rises in technology stocks such as Facebook, Apple and Google's Alphabet. The Dow Jones Industrial Average, surged 25.1 percent this year, while the S&P 500 increased 19.4 percent.

In the USA President Donald Trump's tax cuts have also given a boost to stock markets as - on the long run - US corporations will be able to save billions of US dollars (thus boosting returns to shareholders). Meanwhile, the tax cut encourages US companies to return foreign profits that are held overseas and encourages direct investment in the USA (which could be negative for Indonesia).

Another important factor that allowed global stocks to rise in 2017 is declining concerns over central banks' monetary policies. The world's key central banks, most notably the US Federal Reserve, show a go-slow approach to easing financial support, making investors less eager to withdraw funds from higher yielding (yet more risky) assets such as in Indonesia. Low interest rates and quantitative easing programs (meaning central banks purchase bonds from financial institutions) have been a major support for investors and asset prices in recent years.

There are also plenty of positive factors stemming from Indonesia itself. Firstly, the country's economic fundamentals are strong with accelerating GDP growth, rising investment in infrastructure, low inflation, rising exports, and early signs of a recovery in household consumption.

Thirdly, a total of 37 Indonesian companies conducted their initial public offering (IPO) on the Indonesia Stock Exchange in 2017, a record in recent history, reflecting companies' confidence to tap funds from the equity market for (among others) business expansion.

Bank of Indonesia Governor Agus Martowardojo added that Indonesian stocks have also been able to rise in 2017 due to the stable rupiah exchange rate. In full-year 2017 the rupiah only depreciated 0.07 percent to IDR 13,548 per US dollar.

What were the best performing sectoral indexes on the Indonesia Stock Exchange in 2017? The benchmark Jakarta Composite Index is divided into ten sectoral indexes. The finance sector performed best, surging 40.52 percent in full-year 2017, followed by basic industry and chemicals (+28.06 percent) and consumer goods (+23.11 percent). Only the agriculture (-13.30 percent) and property, real estate and building construction (-4.31 percent) were in the red this year.

Performance of Sectoral Indexes of the Indonesia Stock Exchange in 2017: 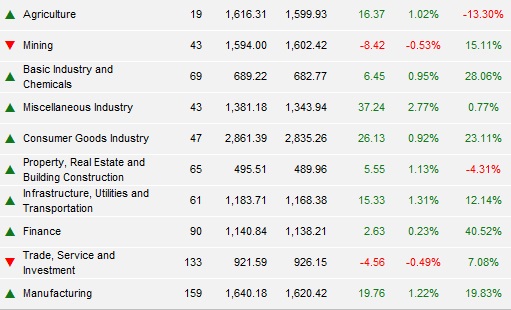 It is also interesting to note that despite the rising Jakarta Composite Index, foreign investors have sold more Indonesian shares throughout 2017 than they bought. Foreigners recorded a net sell of IDR 39.87 trillion (approx. USD $3 billion) in 2017. Indonesia Stock Exchange officials said these foreign capital outflows are not because foreign investors are exiting Indonesia but they are simply repatriating their profits. This also implies that domestic investors have been pouring money into Indonesian stocks.

What were the Indonesian blue chips that experienced great growth in 2017? As expected several banks are high in the ranking (earlier we saw that finance was the best performing sector in 2017).

Shares of Bank Danamon Indonesia, Indonesia's fifth-largest lender, surged 87.3 percent in 2017, particularly supported by the recent announcement that Japan's Mitsubishi UFJ Financial Group plans to buy a majority stake in Bank Danamon Indonesia. Meanwhile, shares of Bank Negara Indonesia surged 79.2 percent, while Bank Rakyat Indonesia grew 55.9 percent and Bank Central Asia rose 41.3 percent in 2017. Investors are positive about Indonesia's major banks as this sector has plenty of opportunities for growth on the long term. The financial and corporate results of these banks are strong, while the number of Indonesians that have a bank account is still low. Bank Indonesia's current low interest rate environment should also boost banks' credit growth in the years ahead.

Biggest Blue Chip Movers on the Indonesia Stock Exchange in 2017: