The trade balance of Indonesia showed another deficit in February 2018, the nation's third consecutive monthly trade deficit. Based on data from Indonesia's Statistics Agency (BPS), the country's total exports reached USD $14.1 billion in February, up 10.1 percent on a year-on-year (y/y) basis, while total imports grew 25.2 percent (y/y) to USD $14.2 billion.

Thus, the subsequent USD $116 million trade deficit in February 2018 is primarily caused by rapidly rising imports. And although Indonesian exports also rose strongly due to the better external economic environment and stronger commodity prices, it was outperformed - and rather significantly - by imports.

Some are concerned see another monthly trade deficit as it puts more pressure on Indonesia's current account deficit and the rupiah exchange rate (the latter already being under major pressures due to looming monetary tightening in the USA). Others are not concerned and say rising imports are the consequence of growing production and investment in Indonesia. This would be a sign that economic activity is accelerating in Southeast Asia's largest economy.

However, a closer look at the BPS data show that consumer goods imports into Indonesia rose by a whopping 55.3 percent (y/y) in February 2018, by far outpacing growth of capital goods imports (+32.2 percent y/y) and imports of raw materials (+20.7 percent y/y). Although - unlike capital goods - consumer goods imports not lead to future revenue streams, a positive message conveyed in these rising imports of consumer goods is that household consumption in Indonesia (which has shown stagnating, even sliding, growth in recent years) is improving (although at this stage strengthening household consumption seems to have a bigger impact on the nation's imports than on domestic retail sales).

It is also interesting to note that on a month-on-month (m/m) basis, imports of consumer goods into Indonesia rose 1.4 percent (m/m) in February 2018, while imports of raw materials and capital goods declined 7.7 percent (m/m) and 9.2 percent (m/m), respectively. The decline in raw materials and capital goods could indicate that industries have become less optimistic than one month ago and therefore decided to limit imports. Meanwhile, the depreciating rupiah also made it less appealing to import products from abroad in February.

M. Faisal, Executive Director of Core Indonesia, expects to see a return to trade surpluses soon. However, he does warn that oil & gas imports are expected to increase ahead of the Eid al-Fitr period, hence causing the nation's oil & gas trade deficit to widen.

Compared to the previous month, Indonesia's February trade deficit actually improved as the country's non-oil & gas surplus expanded, while the oil & gas deficit narrowed. However, the oil & gas deficit remains the key factor that causes the overall trade deficit of Indonesia. In February 2018 the oil & gas balance showed a USD $869.7 million deficit (improving from a USD $935.6 million deficit in the preceding month), while the country's non-oil & gas balance showed a USD $753.7 million surplus (improving from a USD $179.6 million surplus in the preceding month). 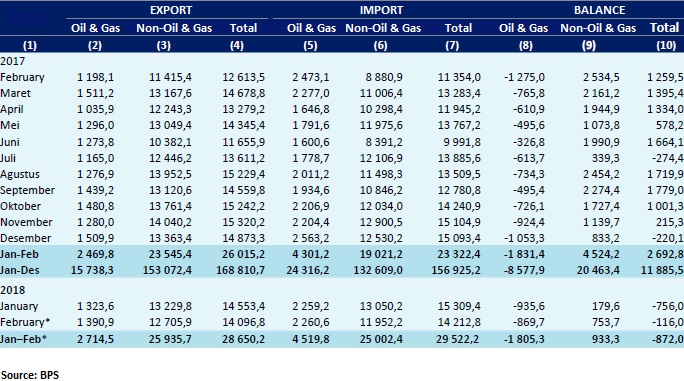