For the first time in 17 months Indonesian manufacturing companies raised their payroll numbers with the rate of growth being the second-strongest that was recorded in the history of the Nikkei Indonesia Manufacturing PMI survey.

Manufacturers boosted their purchasing activity slightly in February. However, they had to face rising purchasing costs as the Indonesian rupiah showed weakness that month. Meanwhile, the rate of cost inflation picked-up from January's three-month low and was sharp overall. As a response, manufacturers increased output charges at the fastest pace since November 2017 (hence passing on part of the higher cost burden to customers).

The survey also showed that manufacturing companies remained confident that output will rise over the coming year (on expectations of improvement in demand and planned expansion), although sentiment was weaker than the series trend.

Aashna Dodhia, economist at IHS Markit, stated that the health of the Indonesian manufacturing sector improved for the first time in three months in February, and to the greatest extent since June 2016. The recovery in domestic markets outweighed the slight decline in overseas demand for Indonesian goods, with total new orders and output both rising for the first time since last November.

Encouragingly, Indonesia's improved performance stimulated jobs growth for the first time in nearly one-and-a-half years. Furthermore, the rate of job creation was the second-strongest recorded in the series history.

However, a key concern remains the ability of manufacturing companies to pass on higher input costs, as output charge inflation was only modest. 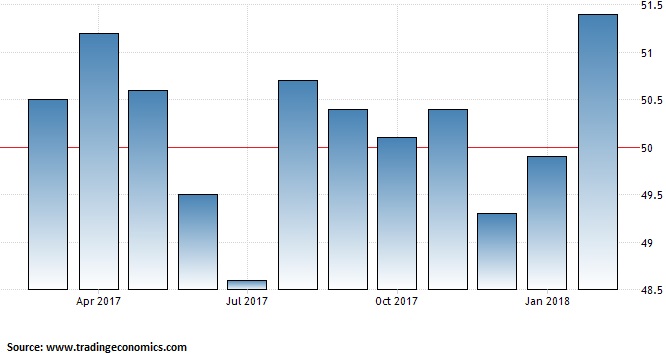