The International Monetary Fund (IMF) slightly cut its outlook for global economic expansion for both 2014 and 2015. The institution decided to lower its forecast due to weaker growth in Japan, Latin America and Europe. According the IMF’s latest estimate, the global economy will grow 3.3 percent year-on-year (y/y) in 2014, down from its previous estimate of 3.4 percent y/y, and 3.8 percent y/y in 2015 (down from 4.0 percent y/y in its July estimate). This is the third time this year that the IMF has had to cut its global economic growth forecast.

Moreover, in the last three years, the Washington-based institution was forced to lower global growth forecasts nine times as it overestimated the global recovery in the aftermath of the economic crisis in the late 2000s. It overestimated growth in advanced economies in particular. In its latest World Economic Outlook report, the IMF therefore stated that advanced economies - US, Europe and Japan - could face several years of sluggish growth unless the governments take efforts to accelerate economic expansion.

Olivier Blanchard, Chief Economist at the IMF, stated that: “economic recovery continues, but it’s weak and uneven.” Generally, the IMF urges the USA, Europe and Japan to maintain low interest rates in an effort to boost more borrowing, spending and growth. Regarding the key interest rate of the US Federal Reserve, the IMF expects that this will be raised in the middle of 2015. 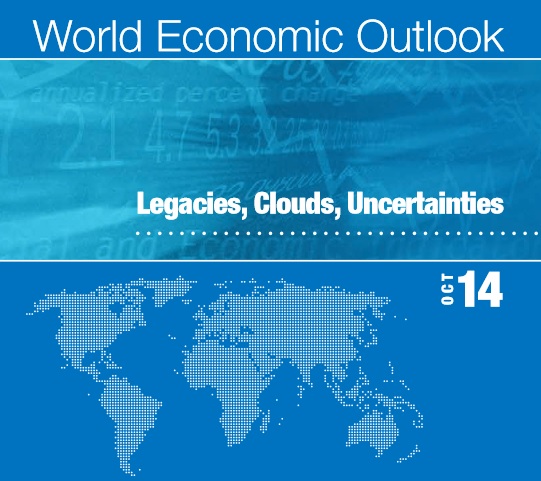 The Eurozone remains a problematic region. The IMF is worried that high public and private debt, high unemployment and low confidence in the future will cause a self-reinforcing spiral and a vicious circle in which investments do not respond to the low interest rate environment. The IMF downgraded its forecasts for economic growth in the three largest economies in the Eurozone (Germany, France and Italy) and said it is of vital importance that richer countries maintain their monetary accommodation and low interest rates. Blanchard added that “low inflation could turn into deflation [in this region] and would have a major impact on the world economy.” Therefore the report suggests that the European Central Bank (ECB) should consider buying government bonds in an attempt to avoid deflation.

Meanwhile, geopolitical turmoil in the Ukraine and Middle East also poses a risk to global growth although for now it will mainly affect the involved countries only. However, if these tensions escalate it could shock oil prices and cause wider trade and financial disruptions.

The IMF also lowered growth forecasts for Japan and Brazil. The economy of Japan - the world’s third-largest economy - slowed after a large sales tax took effect this spring.

Meanwhile, the World Bank expects that Indonesia’s economy will accelerate to 5.6 percent (y/y) in 2015, anticipating a stronger flow of foreign investment and higher export demand. The Washington-based institution said this in its East Asia Pacific Economic Update that was published on Monday (06/10). However, the World Bank warned that ‘a lot will depend’ on the effectiveness of president-elect Joko Widodo’s government and his reform programs. Widodo will be inaugurated as Indonesia’s seventh president on 20 October 2014. However, he faces a hostile parliament as defeated presidential candidate Prabowo Subianto controls the majority of seats in parliament. Widodo want to cut massive government spending on fuel subsidies and instead tunnel the available funds to social and economic development in Southeast Asia’s largest economy.

Some points about Indonesia’s economy:

• Foreign direct investment (FDI) growth in Indonesia slowed to 17 percent in the first half of 2014, down from 19 percent in the same period last year

• Indonesian exports should recover in 2015 as the government made some successful renegotiations with local miners. This means that mineral exports will grow