Although Indonesia's score was unchanged, the nation's ranking fell in the latest Corruption Perceptions Index, compiled by Berlin-based Transparency International. In the 2017 edition, Southeast Asia's largest economy Indonesia ranks 96th, down from 90th in last year's edition. The index, which ranks 180 countries and territories by their perceived levels of public sector corruption (based on input from experts and businessmen), uses a scale from 0.0 (highly corrupt) to 1.0 (very clean).

In the introduction of its latest report Transparency International notes that many countries have made little to no progress in the last six years. Even more alarming, data and research indicates that those countries with the lowest protections for press and non-governmental organizations (NGOs) tend to have the worst rates in terms of corruption. Research also shows that almost all journalists killed since 2012 were killed in corrupt countries (scoring less than 4.5 in the index).

For example, in Brazil, which scored 3.7 in thee 2017 index, 20 journalists were killed over the past six years. They were targeted for their investigations into topics such as local-government corruption or drug-related crime, hence a portion of Brazilian reporters risk their lives on a daily basis by simply doing their job.

Besides the link between press protection and corruption, Transparency International also mentions the relationship between corruption levels and the freedom with which civic organizations are able to operate and influence public policy. Research shows that most countries that score low for civil liberties tend to score high for corruption. 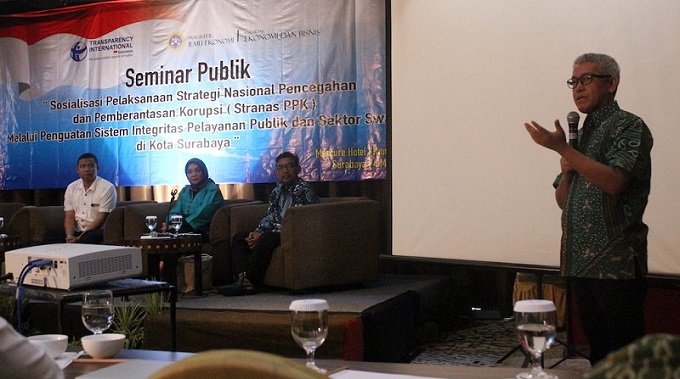 Regarding Indonesia, Transparency International states that the country still has a long way to go in the fight against corruption. However, it managed to climb from 32nd to 37th in the last five years. It attributes the improvement to the work of Indonesia's leading anti-corruption agency (Corruption Eradication Commission, or KPK) in taking action against corrupt individuals.

After a strong rise in the Corruption Perceptions Index between 2005 and 2015 (see table below), Indonesia's score has been stagnating in the 2015-2017 period despite a stable and clean central government under President Joko Widodo (none of his ministers have been linked to corruption cases). However, corruption at the local governments and districts as well as in parliament and political parties remains widespread.

And despite a high degree of freedom of press in Indonesia (implying journalists are free to report their stories), the problem with media in this country is that many media organizations are owned by businessmen who have clear political interests. These interests impact on the reports that surface on TV channels, newspapers and magazines.

Scores of Indonesia in the Corruption Perceptions Index: