After months of significant Russian military build-up around the borders of Ukraine – and after Russia had officially recognised two self-proclaimed states in the Donbas region of Ukraine (namely Donetsk and Luhansk People's Republics where there had emerged a war between the Ukrainian military and Russian-backed separatists) on 21 February 2022 – Russia launched an invasion of Ukraine on 24 February 2022.

It is a decision with far-reaching consequences. Within one week, more than 10,000 people are estimated to have died in clashes between both sides, while it has created a very hostile environment between Russia and the European Union (EU), one that was already quite troubled due to matters such as the Russian annexation of Crimea in 2014, the shooting down of Malaysia Airlines Flight MH17 over Ukraine in 2014 (allegedly by a Russian-made missile launcher fired by Russian-backed rebels), and poisoning of Russian opposition leader Alexei Navalny in 2020 (and his subsequent jailing in Russia after receiving life-saving treatment in Germany).

Matters further escalated in the days after the invasion as a range of sanctions were announced aimed at harming the Russian economy and Russian President Vladimir Putin as well as his cronies (including the freezing of Russian assets abroad, banning of Russian airlines from entering certain air spaces and by excluding specific Russian banks from the Swift payment system). EU member countries – besides giving moral support – also started supplying weaponry to the army of Ukraine, while EU leaders (including European Commission President Ursula von der Leyen) made aggressive statements, such as: “Ukraine is a European country, and therefore is one of us”, or, "we want them [Ukraine] in the EU". President Putin responded by putting Russia’s nuclear weapons on alert. And so, the situation spiralled further out of control.

While Indonesia Investments, too, condemns the use of fatal force and disrespect to – or sheer violation of – the sovereignty of another country, it is important to put the situation into context to obtain a better understanding of what is happening.

In a nutshell, Russia has repeatedly objected to the presence of a ‘Western bloc’ in the form of North Atlantic Treaty Organization (abbreviated as: NATO) members next to its borders as it fears NATO weaponry can then be stationed next to Russian borders (similarly, the United States – back in 1962 – did not accept the presence of Soviet missiles in Cuba).

Considering NATO is a military alliance that was established by the US, Canada, and several European nations in 1949 to contain the influence sphere of the Soviet Union and to halt the spread of communism (or in other words: an anti-Soviet alliance), it makes sense that Russia is suspicious about the intentions of NATO, particularly for someone like Putin who was born, raised, and trained (as a lower ranked officer in the Soviet Union’s security agency, KGB) during the Cold War. Perhaps in President Putin’s mind this war never ended.

After the official end of the Cold War (around 1991) and collapse of the Soviet Union, it would have made sense to disband NATO. After all, both the communist and Soviet threat had ceased. But, instead, NATO turned into a collective security agreement, aimed at protecting its members from external aggression while promoting peaceful mediation of conflicts within the alliance. Moreover, NATO continued to expand to Eastern Europe in the 1990s, 2000s, and 2010s, thus coming closer and closer to the borders of Russia. Such NATO expansion obviously was a thorn in the flesh of Russia, which probably remained suspicious about the intentions behind it.

This is part of the introduction of the article that is included in the February 2022 report. Besides explaining the context surrounding the Russo-Ukrainian war, the article also discusses the (possible) effects of this war on Indonesia, including the high crude oil price that will cause an additional burden on the government's budget deficit, Indonesia's role as G20 President, trade (particularly wheat and meslin imports), and stocks and bonds.

Price of the February 2022 (electronic) report: 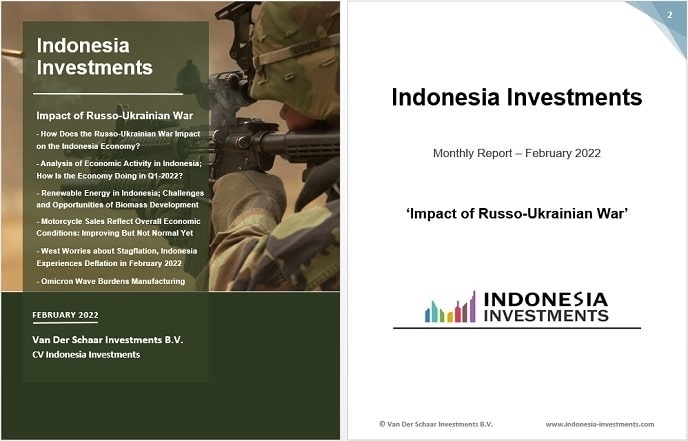